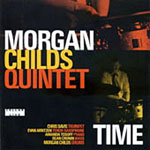 It is no exaggeration to suggest that the energy of this quintet, led by drummer Morgan Childs, brings back memories of an era when Art Blakey led Messengers bands that included saxophonists such as Wayne Shorter and trumpeters like Terrance Blanchard or Wynton Marsalis. This quintet sounds as crafted and tight on Time as some of the best Messengers bands once sounded, though Childs is not a Blakey-like drummer. He is much more lyrical, and even though he is playing a traditional trap set he often sounds as if he were playing a melodic instrument. Childs is not just a fine instrumentalist then, but is also a beating heart in the wholesome body of his quintet.

This record is also reminiscent of a program that bebop artists held down. It pulsates with that kind of rhythm and fervor. Trumpeter Chris Davis is raw and simmering hot. Saxophonist Evan Arntzen is gloriously full-bodied and forthright. Bassist Sean Cronin conjures up Ray Brown as he caresses and stabs at his bass, plucking it to life as Amanda Tosoff is positively breathtaking at the piano. Together, this quintet attacks a repertoire that ranges from a classic standard from Finnegan's Rainbow, "How Are Things In Glocca Morra?," to classic bop songs such as Donald Byrd's "Omicron."

Uniquely, Childs rarely solos on the record, taking a few choruses now and then. And when he does, as on Ritchie Powell's "Powell's Prances," he does so with such vigor that he infuses the melody with a robust rhythm all over again. The spotlight rotates mostly from the piano of Tosoff to Arntzen's tenor saxophone and bounces off the brass bell of Davis' horn. The same can be said of Cronin, who is subdued throughout the racy, bebop set. Davis is superb when he solos with the Harmon mute on "How Are Things In Glocca Morra?," trading eights with Arntzen.

This is not, obviously, a regular group, but one brought together for a live concert and a recording with Childs as leader, though the interplay between each of the musicians suggests otherwise. And this is what makes the recording thoroughly enjoyable. It is also a wonder that the music—most of it in a hard-rocking bop idiom—sounds ravishing when it is so easy to sound jaded playing such fare. This also speaks to the enduring nature of the music itself.

Omicron; Re-entry; Behind The Bar; Powell's Prances; How Are Things In Glocca Morra?; Simmer Low; Time; Petit Dejeuner; The Closer.