Michael Brecker: Time Is Of The Essence

By JOHN SHARPE
February 1, 2000
Sign in to view read count 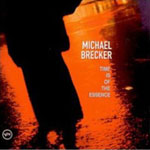 Whether you’re selling beans or CD’s, it’s nice to have a “hook.” Having dynamo drummers Elvin Jones, Jeff ‘Tain’ Watts and Bill Stewart on board certainly provide Time Is Of The Essence with abundant star power. Adding superstar guitarist Pat Metheny and B-3 master Larry Goldings further enhances the package. No doubt the cast is first-rate, but do they deliver? Are you kidding, these guys are pros! Tenor saxophonist Michael Brecker gives each drummer 3 tracks each, while Metheny and Goldings are a constant throughout. Jones, Watts and Stewart all have different styles and provide Brecker and crew with a variety of rhythms to work out on. Elvin’s predictably intense, Jeff provides bopish swing, Bill lays down the funk. Although the focus may be on the timekeepers, it’s Goldings’ crafty organ work that really anchors this session. His solid comping provides the foundation on which Metheny and Brecker build their dazzling improvisations. Over the past couple of years Michael Brecker has definitely found his groove. Time Is Of The Essence proves, again, that this former pop/funkster is a serious artist and a force to be reckoned with. (####)

Arc of the Pendulum, Sound Off, Half Past Late, Timeline, The Morning of This Night, Renaissance Man, Dr. Slate, As I Am, Outrance (69:31)