By JAKOB BAEKGAARD
August 1, 2015
Sign in to view read count 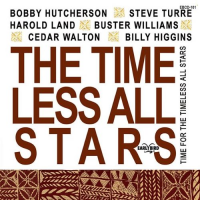 A common strategy of promotion in jazz is to highlight the famous musicians that any given musician has played with. It seems that being a name is a sign of quality in itself and, naturally, it follows that many stars make a great record. However, there is also an old saying that "too many cooks spoil the broth." Too many stars can mean too many egos battling for attention and too little music.

Fortunately, the constellation of The Timeless All Stars proves that it is actually possible to fulfill the high expectations of great names playing together. Bassist Buster Williams, vibraphonist Bobby Hutcherson, pianist Cedar Walton, drummer Billy Higgins, saxophonist Harold Land and trombonist Curtis Fuller first came together in 1982. They released two records on the Timeless label and one on Delos.

Time for the Timeless All Stars sees the return of the group, but with a slight change: Curtis Fuller is replaced by Steve Turre on the trombone -not a bad substitute. The album was recorded under the supervision of bassist and producer Mickey Bass in 1990 and was first released on his Early Bird label in 1991.

What is really striking about the album is how the joy of playing shines through, but also the sophistication of the improvisations. The style of the music that is played is basically classic hard bop with clear themes and extended improvisations, but the group's natural, tight swing, and their ability to listen to each other and make their voices speak in changing dialogues, is simply amazing. At this point, they had played together for a long time and it can be heard. There is a sense of democracy in the group, which is underlined by the fact that each member contributes a composition to the record, except Billy Higgins whose flowing rhythm is the heart and soul of the group.

Highlights include Harold Land's intense "Dark Mood," with subtle nods to John Coltrane's reading of "My Favorite Things," the relaxed swing of Buster Williams' "Song for Thaddeus" and Cedar Walton's up-tempo excursion "Firm Roots," with lightning-fast vibraphone patterns from Hutcherson, beautiful piano breaks and tight unison lines. It is a piece that displays a high level of musical virtuosity, but also a sense of space and dynamics when Billy Higgins plays a solo that is like a little composition within the composition.

Time for the Timeless All Stars is a record that truly delivers on the promise that great stars can create great music when they get together. Connoisseurs of any of the musicians involved are encouraged to check out this record.

Note: Apparently, there has been a CD-R -pressing of this album in circulation, but as of June 2009, the CDs are glass-master pressed.

About Time For The Timeless All Stars