Russell Malone: Time for the Dancers 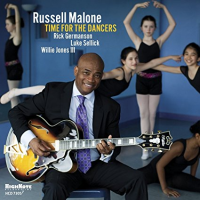 The flame lit so brightly many years ago by guitarist Wes Montgomery continues to burn with intensity thanks to gifted torch-bearers like Russell Malone whose third album for HighNote Records, Time for the Dancers, not only mirrors Montgomery's singular musical temperament but ushers it into aesthetic realms that would surely have had Wes nodding his approval.

Another similarity: Malone's irrepressible charisma shines through on every number, from Roland Hanna's "Time for the Dancers" to Malone's solemn "Flowers for Emmett Till," an entirely appropriate way to crown the inclusive quartet session. The leader enters late on "Dancers," pianist Rick Germanson and drummer Willie Jones III having established a seductive Ahmad Jamal / Poinciana groove that gives way to handsome solos by Malone and Germanson. Malone wrote the funky "Leave It to Lonnie" for his friend, bassist Lonnie Plaxico, "The Ballad of Hank Crawford" for the acclaimed alto saxophonist.

Another ballad, Peggy Lee's melancholy "There'll Be Another Spring," precedes Malone's metronomic "Pocket Watch" and Jose Feliciano's shapely theme from the TV series Chico and the Man, which may at first blush seem a curious choice for a jazz album but works quite well, thanks in large measure to the superior artistry of Malone and his teammates, which prevails throughout the album. Billy Joel's ballad "And So It Goes" leads to Bobby Hutcherson's lively "Little B's Poem" and "Emmett Till," written as an homage to the black teen-ager who was brutally murdered in Mississippi in 1955 for allegedly flirting with a white woman (who admitted years later that she had fabricated parts of the account).

Malone's playing is exemplary from end to end, while Germanson, Jones and bassist Luke Sellick frame emphatic statements whenever their services are needed. This is clearly a working (together) group, and Time for the Dancers promises great pleasure no matter when the "play" button is engaged.

Time for the Dancers; Leave It to Lonnie; The Ballad of Hank Crawford; There’ll Be Another Spring; Pocket Watch; Theme from “Chico and the Man”; And So It Goes; Little B’s Poem; Flowers for Emmett Till.