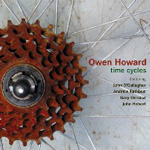 Rhythm is all, goes one jazz adage. But when drummer/composer/leaders abuse their privilege, their projects often fall short by grabbing knowing listeners with overly technical and acrobatic demonstrations of mere rhythmic savoir faire. When these performances are thoughtfully conceived and rendered with maturity, such recordings have the potential of winning over audiences. In Owen Howard, the Spanish Fresh Sound New Talent label presents not only a deserving composer, but a first-rate drummer as well.

Time Cycles is a rhythmically luxuriant album with many cutting-edge improvisations. In listening, one travels through an intelligently paced and varied set of contemporary-sounding originals (the only cover is John Coltrane's "Giant Steps ). It is also quite interesting to hear Howard lead the group from behind his kit.

What's most striking first compositionally is the use of an overriding melodic phrase across the album. The melody of the triptych "Kalimba 1-2-3, titled after the African idiophonic instrument, is arranged and harmonized differently throughout the recording. The first instalment of the phrase, with its oozing and intertwining superimposed patterns, as well as the first variation's rockier 5/4 beat and the light-headed last variation, act as aural landmarks and help unify the session.

"Slow Day, with its John Scofield/Joe Lovano-like feel, eases its way well into an alto sax/drums duet, O'Gallagher's tearing Coltrane-influenced solo on "Cryptic, and the innovative vamp at the end of "Giant Steps. The pensive melody of "Quiet Peace/Piece showcases the softer side of the unit, especially in the outhead, where Rayburn and O'Gallagher lock horns quite sumptuously.