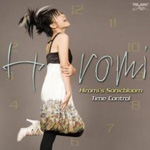 "It is time to be out there...in many different ways.
- from Hiromi's liner notes to Time Control.

It's true. She can easily take Best of the Year honors with this album, but Hiromi is still an unknown quantity. Many have yet to hear the exciting and creative sounds that come from this talented pianist and her fiery band.

In guitarist David Fuczynski, she's found a truly creative artist who carries on the timeless tradition of jazz through the mechanics of his instruments. At times, you're not sure if someone is singing or (in fact) Fuczynski is dishing out vocal-like thrills from his guitar. The sheer variety that he espouses matches the creative restlessness that Hiromi showers us with in each of her ventures.

Bassist Tony Grey adds to the lyricism of this program throughout with a deep resonance that moves seamlessly across the board. He and drummer Martin Valihora color subtly from the background, giving Sonicbloom a solid foundation while remaining far enough in the background for piano and guitar to strut. And they do just that, with power.

Hiromi's got the chops. She took up the piano at age six, and at age fourteen went to Czechoslovakia to perform with the Czech Philharmonic. At age twenty she studied at the Berklee College of Music in Boston. Now, a few years shy of thirty, this young jazz lion brings us music without category.

At times jazz/rock and at times avant-garde, Sonicbloom appeals to a progressive audience. You can feel the powerful influence of Hiromi's mentors coming through. Pianists Oscar Peterson, Ahmad Jamal and Chick Corea have all given her plenty of ammunition for this latest escapade. Duke Ellington's "jungle style of the late 1920s shows up, as does the easygoing stride piano of James P. Johnson and Fats Waller.

Hiromi caresses the blues with several of the selections on Time Control. The emotional pull and push that she and Fuczynski provide belie a love for music that carries deep meaning. Her melodies weave through the session seamlessly, varying dynamic volume with the changes in mood. The band comes together as one mind, fulfilling the innermost thoughts that their leader has created for this session. It's a winner, announcing the outing of a creative pianist and her charged-up band.