By JOHN KELMAN
November 3, 2005
Sign in to view read count 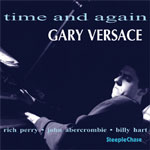 Gary Versace sure gets around. Since relocating to New York in 2002 following a ten-year professorship at the University of Oregon, he's become such an in-demand player that he's rarely at home—a situation bound to remain status quo well into 2006. Whether playing accordion on Maria Schneider's acclaimed Concert in the Garden (ArtistShare, 2004), piano on John Hollenbeck's multifaceted large ensemble A Blessing (OmniTone, 2005), or organ in John Scofield's Ray Charles Tribute touring band, his amazing flexibility is becoming increasingly apparent.

While Versace is capable on a number of instruments, his focus remains the Hammond B3 organ, like Larry Goldings. And like Goldings, he possesses a clear understanding of the tradition stemming from seminal B3 players Jimmy Smith and Larry Young, but retains his own unique emphasis. The only real precedent would be the more textural approach of Dan Wall—making Versace the perfect choice for Abercrombie in his organ trio, now that Wall has chosen to stop touring. Versace clearly understands Abercrombie's more modernistic slant to the jazz tradition, an area he explores on his own debut, Time and Again.

Joining Versace for this effort are Abercrombie, Richard Perry—a tenor saxophonist Versace has encountered in a number of situations—and drummer Billy Hart. Hart is the wild card, but you'd never know it. Despite this being their first time playing together, Hart and Versace sound as if they've been working in sync for years. Testimony to the clearly shared philosophy of open minds, open ears and checked egos, the quartet's remarkable simpatico is evident from the first notes of the gently lyrical "Homeland —one of six Versace originals that make up the set, along with Abercrombie's equally melodic "Excuse My Shoes.

With only one day in the studio, it's no surprise that Time and Again emphasizes blowing over compositional detail. Far removed from the traditional A-A-B-A format, Versace's writing remains rooted in theme-solo-theme structures. His strength is in creating songs that are approachable enough to stick in the mind, yet provide plenty of latitude for improvisational interplay.

Abercrombie has always emphasized understatement and implication; Versace and Perry are equally suggestive. The result is that the group never really boils over, but there's a simmering energy throughout. Whether on the gentle sway of the title track, the triplet-over-four feel of "222, or the more emphatic "Russian Playground, everyone plays with the kind of commitment and connection that endows this disc with a cohesiveness belying the single-day studio effort's inherent session-like nature.

Time and Again also needs to be placed in context. It demonstrates Versace's improvisational élan and abstract colorations, as well as an ability to write material that encourages risk even as it remains close to the center. But Versace's wide reach also suggests that this is but the tip of the iceberg. Time and Again is a strong debut, but Versace is capable of much more—a fact that will no doubt be revealed in good time.