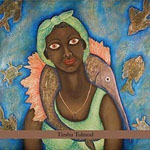 A killer Latin rhythm section combined with soulful Jewish melodies is just one aspect of what makes Timba Talmud, from percussionist Roberto Rodriguez, such an infectious delicacy. Sexteto Rodriguez, as the band is now called, has been the premier vehicle for Rodriguez to showcase his strong compositions that, like a good Cuban sofrito or a tasty Jewish kugel, beautifully blend and simmer a variety of ingredients into a seamless pleasure. Over the years, Rodriguez has perfected a recipe that has both legitimized and increased the musical significance of what originally was seen as a '50s one-off novelty concept: Latin rhythms and Jewish melodies.

Although Rodriguez' cleverness allows him to pay appropriate homage to these roots—witness his loungey "Mambo Kitsch (for Susie)," featuring a delightfully cheesy combination of guest guitarist Oz Noy and Uri Sharlin's organ—he is foremost a serious politically-aware musician, elegant composer and skillful bandleader. Clarinetist Gilad Harel and violinist Jonathan Keren are able to move between Latin and Jewish with incredible ease, turning tunes like "The Son of Second Avenue" and "Kids Club Cha Cha" into exciting new music. Harel in particular doesn't overdo the klezmer ornamentation but uses his wonderfully soulful tone to imbue these tunes with their Jewishness.

ADVERTISEMENT
Other guests include flutist Itai Kriss, whose Latin/Middle Eastern brand of playing is custom made for this venture, and Oscar Onoz, whose tasteful trumpet flavors "El Sabor Del Shabat" and Algerian composer/pianist Maurice El Medioni's "Oran Oran." The latter is given a lengthy up-tempo interpretation that includes vocals and some appropriately Latin-jazzy Sharlin piano, while the title cut mixes in some electronics, possibly portending a new direction for the band. Things close with "Oyemayá (para Barack Hussein Obama "Omó" "Ochá")," a bass clarinet/ violin doina freakout and celebratory Latin/Klezmer paean. Under Rodriguez's inventive direction this magical mixed musical marriage is his best release yet.