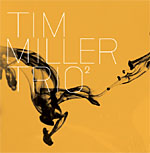 Very few guitarists have digested, head-on, the daunting influence of Alan Holdsworth, and then assimilated it into their own playing. Fewer still have combined Holdsworth's no-longer-futuristic linearity with the science of melodic chord permutation, as promulgated by the likes of George Van Eps, Ted Green and Mick Goodrick. Even fewer are in their thirties, like Tim Miller.

These qualities alone would make Miller's current release—the second with his trio including acoustic bassist Dr. Joshua Davis and drummer Take Toriyama—auspicious, but there is much more to consider here. Miller has taken his game up—way up—in terms of the sound he's achieving on record, to the point where his work advancing the breadth of the tone palette alone can now be compared to those at guitardom's highest levels.

Miller's approach is deceptively simple. Driven by his belief that the electric guitar is too midrange-heavy to "work" with acoustic instruments, he chased down the high end by isolating himself in a room with a guitar and a microphone and placing his amplifier in another room. Both acoustic and electric outputs were recorded, and are capable of being blended at will throughout. From a technical recording standpoint, then, the degree of innovation here appears relatively modest.

Aesthetically, though, there is a level of shimmering discernment and detail at play here that pushes the elusive annals of tone. A dazzling bounty of tonal delights—from vintage dreadnought to fat bop, steely Strat to Texas Tele—emerge, played at breakneck speed and sometimes changing from measure to measure. Miller's blistering legato technique is more percussive than Holdsworth's—his chord work even more modern and complex, yet always musical, never guitaristic. Steve Hunt recorded and engineered this outing, making it special by bringing all his previous experience with Holdsworth to bear.

The opening track, "Electric," features an airy acoustic head, pulsed by a chord ostinato and propulsed by a beaten snare that sounds copped from rag-tag street kit by Toriyama. Miller begins his solo with a gorgeously sustained single tone. From there he builds, in seconds, two complex, rhapsodic figures that collapse on themselves, all the while adding echo, subtracting sustain, metering metal and pumping air into the tone. He then combines the discerning changes in tonal detail with improvisational detail, repeating a 32nd note motif that subtly changes from measure to measure, developing into its own intervallic song. Toriyama does not keep pulse, challenging Miller at every turn, the clatter abetting what up to that moment, is Miller's (and band's) finest hour.

That five minutes alone anoints Miller as the jazz world's guitar Superboy. The next 40 minutes only get more momentous, with Miller out-playing and out-tone-meistering himself from one tune to the next. He takes respite only to issue a definitive solo spot that sounds like his personal revel to the "Night Sky." Miller also gives composition a twist by intermingling motifs, statements and devices from each of the tunes, to the degree that the recording becomes one labyrinthine compositional whole. Yet many, like "Trace," can stand on their own, as catchy gems chock full of hummable melodies, with flashes of energetic soloing.

Joshua Davis' sense of time is solid—at times locking with the bass portions of Miller's chord voicings—and (thanks to some crafty recording) sounds electrifying yet woody, as on "Trace." Toriyama logs one of his greatest recorded performances ever, benefited by the best recording of it, as evidenced in the turn-on-a dime ride swing melded to crushing jazz-rock stylings slammed against each other in "Thread." Miller dedicated the recording to Toriyama but it's the drummer himself who provides the only tribute needed. Whoever hears this recording will know that during his all-too-short stint here, Toriyama thoroughly mastered the drum kit, fearlessly incorporating some sounds that, previous to his work, seemed not to belong. And whoever hears some of his other work will know he did the same over the complete range of musical idioms.

Miller believes that this is his most personal recording to date, on which the sound he has imagined for so long has finally made it onto record. That's just one reason why Mr. Miller was recently cited by no less than Alan Holdsworth, in the most recent issue of Guitar Player Magazine, as one of two current guitar players to watch.