Tim Garland: Beyond the Frontier

By IAN PATTERSON
November 30, 2009
Sign in to view read count 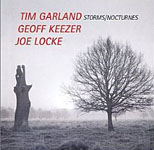 TGLThat's an interesting question. If you get deeply into the music a lot of it is about honesty and you don't want to feel that you're just grafting something else on. When you hear a bamboo flute played so beautifully by an Indian musician it just seems dishonest for me to appropriate that. You think "gee, I'll just leave that to him" [laughs]. You're right though, percussion is the one big exception.

TG: It's the same with Brazilian music too. I love Brazilian music and a certain amount of tango as well. We celebrate a certain type of diversity and synthesis but I think it's important to make a distinction between a healthy influence and actually trying to be the real thing. That would be completely the reverse of what we're after.

AAJ: You wrote a concerto for saxophone several years ago, and I wonder whether Eugene Rousseau's 1971 saxophone concerto had been an inspiration for you?

TG: Actually no, though I'm aware of his work. The composers who really inspired me would include Henri Deutilleux, Michael Tippett and Benjamin Britten I love, especially their string writing, and inevitably classics like Ravel, Stravinsky, and Bartók going further back. I tend not to have all that much connection with classical saxophone.

I think the saxophone is more about the personality of the player rather than the instrument. If you were to find an amazing tuba player you would get him to join your band not because you needed a tuba but because you need him [laughs]. It's a lot about the dude on stage and if you can possibly accommodate his instrument then you will.

Actually the first person who really inspired me was Tony Coe. He was one of the guys that Henry Mancini used to play the Pink Panther themes [laughs]. He comes from my hometown of Canterbury and he was the very first saxophonist I heard live. At times he sounds a little bit like Paul Gonsalves. And when I first started playing with Chick Corea—and this shows you how deeply Chick listens to music —he said: "Have you checked out much Paul Gonsalves?" I said: "Ah, you're hearing that Tony Coe in my playing."

It's fascinating how Chick picked that up. I think it's the use of register, the extending of high and low notes—that's something I got from Tony. He lived about a street away from me. He was very much my first influence. I don't think he realizes to this day how much he influenced me.

AAJ: More recently you've been commissioned to write a concerto for cello; can you tell us something about that?

TG: There are two concertos that I'm working on and one is a tango-influenced cello concerto for Eduardo Vassalo, who's the Principal with Birmingham Symphony Orchestra. He's from Buenos Aires and his father was the bassist in Astor Piazzolla's band, and I think he played with Piazzolla as a young man.

It's a double concerto which he's asked me to be in as well. It has become a look at the connections between jazz and tango, of which there are many, within a modern orchestral framework. So it's been a challenge in the sense of bringing out the best of both instruments and making sure that the dynamics are blended and that the orchestra is supported in the way that it needs to be. But I'm really excited about it.

Eduardo comes from a folk group, the tango root, and it's the engaging of the body in the music as well as the mind. It's very visceral, where the body is really engaged and the guts are really in the music and one could say that brings it closer to the African sensibilities. Not all string players have that sense of time and placement but Eduardo is a joy to write for because if you wrote him a bebop head he would swing his ass off [laughs]. He's got that wonderful sense of physicality.

I remember Bill saying this, and you can't imagine Bill Bruford dancing on the disco floor [laughs], but when we play our music we are dancing. That is our dance. 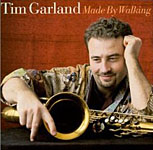 I've been practicing it and it feels like my most mature work to date. There's plenty of space for the soloists. Eduardo's part is completely written out but I'm improvising quite a lot. I'm also looking forward to the day when I'm a bit older when other people have a go at playing these parts which I've written for myself. I think that is a composer's greatest desire, that the music outlives him [laughs].

The other concerto is with the London Symphony Orchestra which will be performed at the Barbican and that's with very similar circumstances but with a percussionist, Neil Percy, who similarly has been Principal for twenty years and exactly the same thing happened as he asked me to be in it as well [laughs]. That will be particularly interesting to watch because he's going to be in front of the LSO surrounded by a whole kitchen of things from all around the world.

AAJ: Do you have more hours in your day than other people?

TG: [laughs],I do struggle with that. Certain things I do I love and I live for, and they are my oxygen but they don't particularly pay very well [laughs]. I then have to make up by doing other things , at best I love them too; sometimes it's teaching, sometimes it's film work. I have got to watch myself sometimes. It's so much easier to see it in other people when you accuse them of being workaholics. Then you look at yourself and think:"Shit, I should stop judging people" [laughs].

One thing I've really enjoyed about being on tour is just being so close to my instrument. Sometimes if you're doing a lot of things, writing or whatever, just that time, again it's that word sacred, when you're just with your instrument practicing on your own —it's so essential. I had to prime that time and guard it because of all the other things in my life.

It is wonderful to be involved in a profession where one of the essences is somehow communication. It's a synthesis, a bringing together of things. It feels as if you're one of the good guys [laughs]. At least we aspire to that.

All Other Photos: Courtesy of Tim Garland