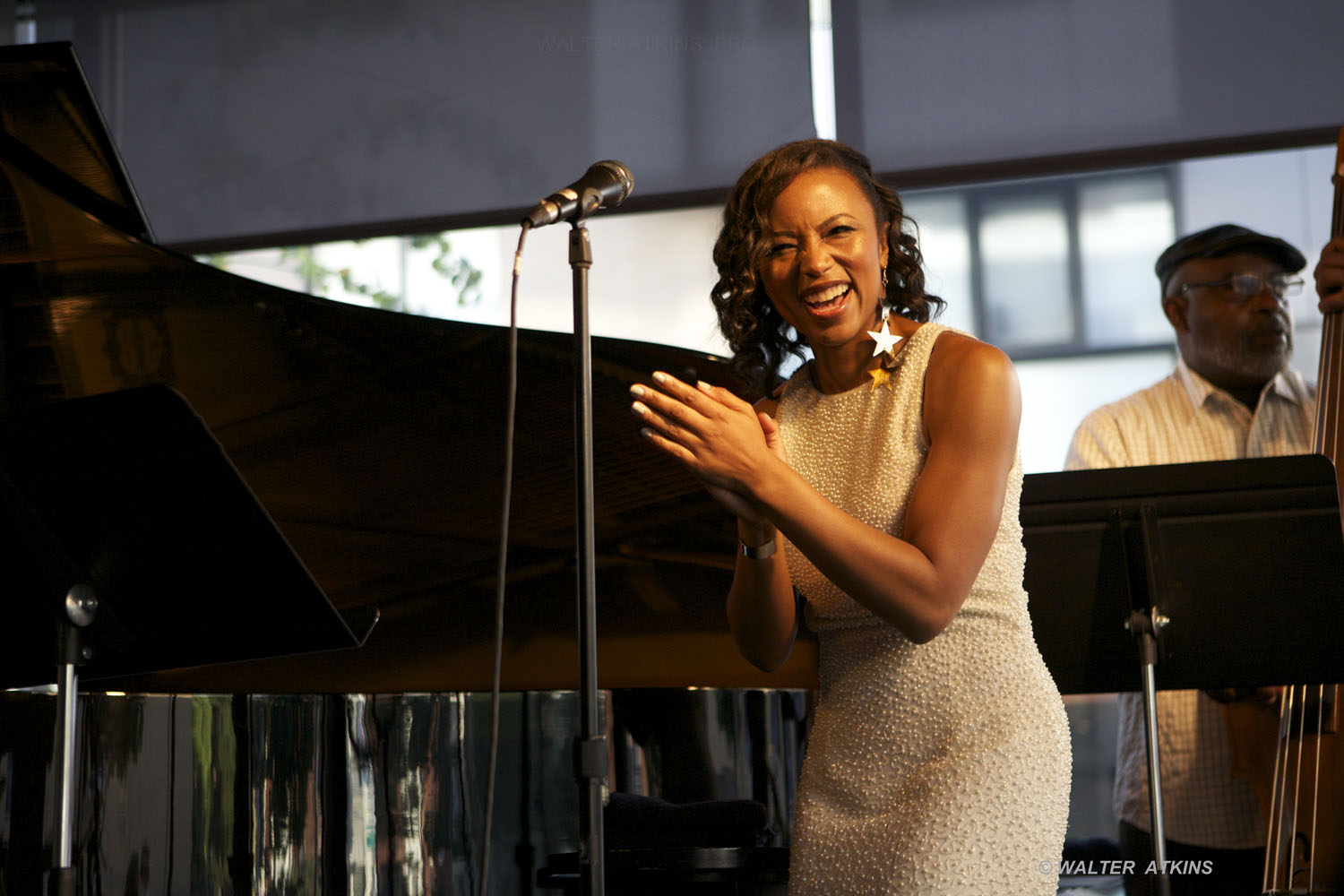 Vocalist Tiffany Austin and her skilled band took the stage at SFJAZZ's Joe Henderson Lab to celebrate her debut Nothing But Soul (Con Alma Music). With an introduction by tenor saxophonist Howard Wiley, Austin walked out in a beaded, sleeveless full-length gown. The ivory toned, form-fitting dress created a classic look for her album release date. Wiley wore a suit and tee shirt with a picture of Mr. Rogers from the PBS show. Austin's set list featured five Hoagy Carmichael standards and a few fun surprises thrown in.

The versatile vocalist/songwriter kicked off the evening in the intimate room with Carmichael's "Baltimore." Her rich, expressive voice soared on the song. Austin's fluid vocals On "Stardust" were firmly supported by Wiley's deep saxophone, bassist Ron Belcher, drummer Sly Randolph and pianist Grant Levin. She presented the emotional "I Get Along Without You" with clear confidence as she held on to each sorrowful note.

She said it was time to "stop boohooing about lost love" and happily changed the mood. Austin introduced an original song by requesting the house's opinion with "thumbs up" signs. She then tackled "Sugar Cookie," a deliciously suggestive number. Austin wanted to "speak on this for a minute." "When you reach out for something sweet it goes to your hips. You want the whole sugar cookie. My sugar cookie is in the audience." Fans enjoyed the sensuous "Cookie" and it generated tons of thumbs up gestures. She said it "stays in the set."

The East Bay songwriter talked about Ornette Coleman who passed away on June 11th. She was working with a band that played Ornette tunes and feeling left out, wrote lyrics for "The Blessing." Austin dedicated the song to him with her uplifting lyrics carrying real weight. She said "I love him" at the end of the song

Austin's "Tete-a-Tete" took Charlie Parker's "Confirmation" and transformed it into a wordless a cappella pairing with Wiley. He introduced "Tete" with a story about the recording session. Wiley said "vocals are not my lane" and claimed the singer made strange sounds in the studio. She meekly protested saying she "did not sound like Marmaduke." Austin sang it with dynamic range, and Wiley's vocalese on the somber duet was actually pretty good.

For Nina Simone's robust spiritual "Sinnerman," Austin included a special surprise from guest dancer Xanthia Van Ewijk. She appeared from the stage side and gracefully moved up the center aisle with the music. She received a round of applause. "Skylark" with its mournful saxophone solo by Wiley complimented Austin's intense vocals. The arrangement of "Georgia" was nuanced and warm. Throughout the evening, the seasoned band led by Wiley's passionate playing, gave the vocalist a rock solid foundation.

For the finale, the smiling vocalist gave the people a choice, "nice and rough or nice and easy." She added, "Y'all asked for Johnny, gotta clap." Austin went into Johnny Cash's 1956 Billboard Hot Country # 1 hit, "I Walk The Line." On this bustling arrangement, Austin's energetic voice swirled around the lyrics, giving them new life. The band just cooked while the pianist rolled. This ultra hip version of "Walk" had The Man in Black smiling.

Tiffany Austin's performance at SFJAZZ was a fantastic blend of genuinely fresh interpretations of Hoagy Carmichael's classics and more. The show clearly earned two thumbs up from the Henderson Lab patrons. Many friends and family, including her pleased parents, helped to make this a special night for the SF Bay Area's emerging jazz artist.