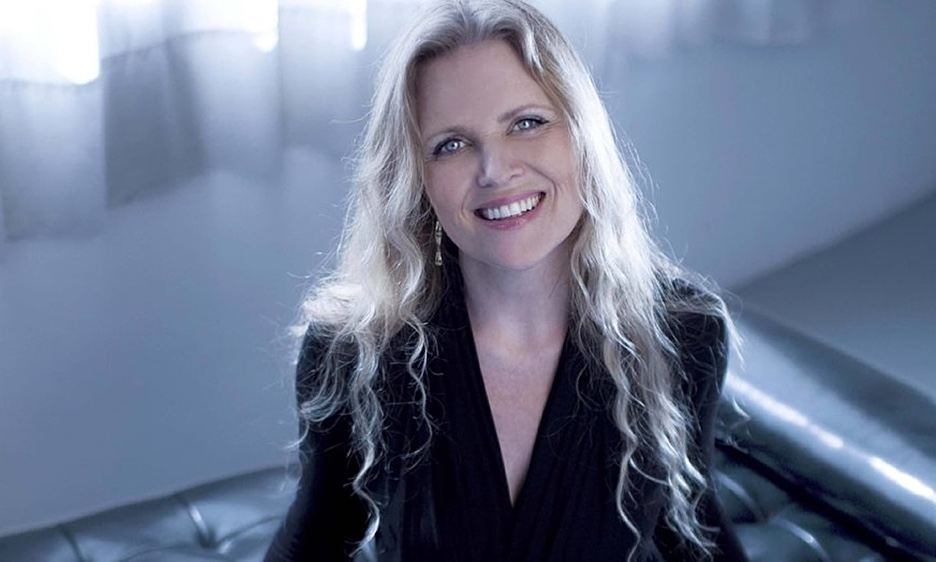 view slideshow
By JOSEF WOODARD
May 8, 2019
Sign in to view read count

Ace jazz singer Tierney Sutton has built up a large discography and international "gigography" with her tautly integrated and long-standing band— pianist Christian Jacob, bassists Kevin Axt and Trey Henry and drummer Ray Brinker— scooping up accolades and trophies, of the GRAMMY and poll-winning sort and more. Enter a new-ish relationship: screen life.

Sutton and band have rubbed collective elbows with the film world in the last few years, after jazz-loving director Clint Eastwood hired them to perform on the score of his 2016 film Sully. Now comes the album ScreenPlay, with re-imaginatively arranged renditions of such film songs as "Diamonds are a Girl's Best Friends" and a medley of "Moon River" and "Calling You" (from Percy Adlon's 1987 film Baghdad Café).

On a cherished venue note, she has enjoyed an ongoing link and artist-venue-audience love affair with the historic Lobero Theatre in Santa Barbara—the oldest continuously running theater in California and a ripe "jazz room"—over many years. That affair hit a new pinnacle last fall, when she joined Pat Metheny's group to give the world premiere of a brand-new ballad by Metheny and seasoned songwriters Alan and Marilyn Bergman. That magic moment was one of many topics covered in a recent interview.

AAJ: Needless to say, there exists a kind of mutual admiration/affection society between you and the Lobero Theatre. As a globe-travelling artist who has known many a venue, does the Lobero hold a special meaning for you?

TS: I've said many times that The Lobero really is my favorite venue. Can I say that? Well, I did.

The stage itself is wonderful acoustically, the house is a perfect size, where there are no bad seats. The Lobero is one of the great historic stages of our country, (one of the classic) theaters that were built in the late 19th or early 20th centuries, like Carnegie Hall. The history and the variety of art, from every genre, that was presented at The Lobero includes every kind of music, theater, dance or lecture.

You can feel the history when you play. The building that houses the Lobero has a specific California architectural charm that warms me every time I'm there. Add that to the fantastic staff, most of whom have been at The Lobero for as long as I've been doing concerts there—15 years?—and you have something very, very special.

AAJ: You were just there for a special performance with pianist Roger Kellaway, but the sort of historic moment of late was your surprise cameo at Pat Metheny's show last fall—and the premiere of the lovely ballad co-written by Pat and the Bergmans, called "Love May Take Awhile." Can you tell me the origin of that song project, and is there a recording future for it at some point?

TS: It came about because in 2012 Pat and I were talking at The Monterey Jazz Fest and he said he'd love to have Alan and Marilyn write lyrics to his melodies. I told him I'd help connect them.

The whole process too almost six years, with many ups and downs. One package of songs sent by Pat was stolen out of the Bergman's car! Yet Pat was very determined, even with his ridiculous touring schedule. What a thrill for me to song with him—he told me later I was the only singer in 40 years to "sit in" with his band—and at The Lobero. Couldn't have been perfect for me.

AAJ: You have a special relationship with the Bergmans, whose work is celebrated on your album ScreenPlay— including a cameo vocal spot by Alan on "How Do You Keep the Music Playing?" Was that important for you to showcase their work on this album?

TS: Actually, the original idea to do a film music album started with the music of the Bergmans, so yes, it was very important. They are easily the most influential film lyricist of all time and my dearest of friends. Whereas most of the Great American Songbook lyricists wrote for Broadway musicals, The Bergman's continued that craft in the modern era, but mostly writing for film.

AAJ: Did your work with the song "Arrow" for Clint Eastwood on Sully—and Christian's scoring work on Eastwood's 15:17 To Paris—"lead you and the band into thinking more deeply about the expressive possibilities of cinema music and songs?

TS: Those experiences surely influenced us, but also, I think our style of arranging and presenting songs is cinematic in nature. For us, each song is a little narrative and we hope leads the listener into a specific cinematic world. That's what happens to us.

You open with your cool, odd meter arrangement of Michel Legrand's masterpiece "The Windmills of Your Mind"—one of those circular songs which remind me of "Waters of March." He passed away recently. Was this and "What are you Doing for the Rest of Your Life?" a kind of memorial tribute to him, after his passing late last year?

TS: We had already chosen and recorded three of Legrand's songs for ScreenPlay when he died. One part of the story that you might not know is that I worked with Michel and the Bergmans as vocal producer of their last project together. It is an album called "Between Yesterday and Tomorrow." It's a 14-song cycle outlining the life of a woman from the first song—"Birth" to the last "Last Breath."

It was written for Streisand in the '70s but never completed. Michel asked French opera star Natalie Dessay to do the project and Sony hired me as vocal producer. I'd worked with Natalie and Michel on a few other CDs, but this was a big project. Full orchestra—amazing arrangements by Michel—and virtually all new material. Natalie is a stunning talent and the album is a masterpiece.

So when Legrand passed, it affected me quite a bit.

AAJ: You also choose some less-than-common material on the album, and sometimes dignify songs we might think of as kitschy—as with the jazzification of the Grease songs. Was that a complicated process, to zero in a set of 15 songs that worked and lived together?

TS: What to choose is always the big question. In the case of the Grease material, that was what interested Christian and he's such a genius, if it interests him, something good will happen. Many of the other songs were chosen by me, but everyone had a hand in suggesting things. "The Sound of Silence" was Ray's idea, "I've Got No Strings" was Trey's, for example.

Over the years, you have done a lot of work, singing and re-arranging the Great American Songbook—largely show tunes from theater. Is there a comparison with the vocabulary of film tunes, which could actually become a new body of music for jazz musicians?

Well I think it already has, and as I mentioned about the Bergmans, lots of great music is coming from film and has for a very long time. In fact, many of the songs we think came from musicals—a lot of Berlin and Cole Porter, for example—actually were written for film.

AAJ: Does this feel like a strong period in your ongoing creative life? Have you arrived, in some way, and also accepted the importance of never fully arriving, as an artist?

TS: No artist ever feels "arrived," I don't think—especially not an improvising musician. And in the current cultural climate, everything we've built can often feel like it's on melting sand.

But the music and the process of playing with the same guys for 25 years? That is a real thing, built on something pretty strong.