By DAN MCCLENAGHAN
July 9, 2013
Sign in to view read count 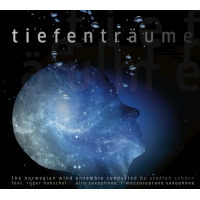 German multiple reed man Steffen Schorn plays a wide array of wind instruments: tenor, baritone, bass, contrabass and subcontrabass saxophones; Bb, bass, contra-alto and contrabass clarinets, along with the piccolo, flute, alto and bass flutes. So it makes sense for an artist with that many wind instruments in his quiver to collaborate with a wind ensemble, specifically with The Norwegian Wind Ensemble, the country's esteemed—and oldest—small orchestra, for Tiefentraume, a set of symphonic music featuring Schorn, along with saxophonist Roger Hanschel, vibraphonist Rob Waring, and drummers Knut Aalefjar and Rune Arnesen, for an exploration of "deep dreams reflecting three of the five mysteries of mankind: the infinity of space, the depth of the sea and the unknown territory of the human mind."

It's an ambitious project that was arranged and composed by Schorn, who wields his variety of lower end wind instruments. The ensemble as a whole displays a space-like, nebulous feeling on one end—flutes, piccolos, oboes—juxtaposed with a deeper, oceanic tidal surge foundation from Schorn's low reeds teamed with the orchestras low reeds and brass.

The title tune expands and contracts—a universe in the throws of its creation—in a magisterial fashion, with searing solos by Schorn and Hanschel. "Dantie's Dance" features low groans and a down-bound train rhythm as it leaves the station, with the high end reeds singing like birds before the ensemble gives way to frenetic sax solo buoyed up by the vibraphone. Then the orchestra surges, under the gravitational influence of the rhythmic pulls of a fast orbiting moon, before they fade off to open the space for Schorn—on a very deep reed—to duet with a Hanschel's on-fire alto sax.

"Tauspiegelungen," at nearly fifteen minutes in length, is the third of the disc's trio of extended pieces—the thirteen-and-a-half minute "Tiefentraum" and twelve-and-a-half-minute "Dantie's Dance" bring the other two. This longest piece sounds like a symphony celebrating timeless mysteries, with its luminous harmonic murk, sweet smears of sound and, initially, a separate-from-temporal-time mood that shifts abruptly to a truculent fanfare approach interspersed with fragile luminosity supplied by the flutes and clarinets and piccolos.

Schorn and The Norwegian Wind Ensemble have created a magnificent and beautiful recording, a new musical universe with Tiefentraume.