By IAN PATTERSON
September 2, 2009
Sign in to view read count 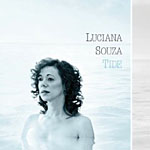 On Tide, Brazilian vocalist Luciana Souza displays all the attributes that brought her the Jazz Journalists Association's female jazz vocalist of 2005 award. Her voice is never less than captivating at either end of a notable vocal range and holds the attractive mix of worldly maturity that comes with age, and a seductive suavness. Beautifully crafted songs with melodies which lull, embrace, and envelop the listener reveal a singer/songwriter at the top of her game.

Souza shares songwriting credits on seven of the ten tunes, while husband and bassist Larry Klein lends his pen to six. Souza's clear-toned sound and the intimacy in her delivery suggest Joni Mitchell as one source of inspiration, particularly on the lovely "Our Gilded Home." Souza has covered Mitchell's "Down to You" on The New Bossa Nova (Verve, 2007) and gave one of the more convincing interpretations of Mitchell's music—a beguiling version of "Amelia" on Herbie Hancock's River: The Joni Letters (Verve, 2007). Souza certainly shares the poet's soul that is at the centre of Mitchell's work; however, the songs on Tide are less word drunk and ultimately sweeter.

A couple of breezy samba numbers showcase Souza's impressive scatting, shadowed by the lively guitar of Romero Lubambo which brings an injection of zest to a familiar style. Vinnie Colaiuta, whose drumming throughout the CD is as understated and as refined as anything he's ever done, adds skipping brushes to these sunny tunes. Also instantly likeable for their hummable melodies, are the finger-snapping "Fire and Wood" which features a lovely Fender Rhodes solo from Larry Goldings, and "Circus Life," with an infectious vocal refrain from Souza.

Real beauty lies in the two songs inspired by poet e.e. cummings. In the past Souza has wrapped her music around the poetry of Pablo Neruda and Elizabeth Browning, and it is an idiom that she clearly thrives in. Here she brings a dreamy, shimmering quality to the ballads "Love —Poem 65" and "Tide;" both pieces, beautifully arranged, are enriched by the sympathetic playing of guitarist Larry Koonse. Two other songs co-written by Souza prove her love of a ballad: the gently paced, "Once Again," with simple piano accompaniment and seductive chord changes, and "Chuva," an incantation sung in Portuguese. The latter track is quite sublime, and features subtle percussive touches from Cyro Baptista.

The album closes with "Amulet," a tune written by the great wordsmith Paul Simon especially for Souza, and ironically it is wordless; Souza's voice traces the melody in harmony with the guitar of Larry Koonse, tailing away on a high note, like a gliding bird receding on the horizon.

Souza's tremendous versatility—she has recorded with Hermeto Pascoal, Fred Hersch, Maria Schneider and Paul Simon, with philharmonic orchestras and in chamber settings—means that the variation in styles should come as no surprise. Yet the changes in pace and mood of the songs, and the range of emotions touched upon by Souza are undeniably impressive all the same. A contender for best vocal album of the year.