By MARK CORROTO
December 14, 2012
Sign in to view read count 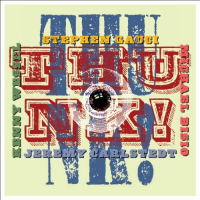 If the subject of an album of covers songs is pianist Thelonious Monk, then the approach invariably is reverence or its opposite, insolence. Bands either worship at Monk's alter or attempt to out-Monk Monk by counterfeiting eccentricity or outlandishness. To quote the great man, "You've been making the wrong mistakes."

One band not making those wrong mistakes is saxophonist Stephen Gauci's quartet. Its eight Monk covers begin with a bold confidence and ply a determined vigor to this famed canon.

Thunk! opens with a hint of funk, as bassist Michael Bisio and drummer Jeremy Carlstedt stroll New Orleans for a pulse. By the time guitarist Kenny Wessel and Gauci enter, the die has been cast. These cats muscle "Bemsha Swing" more as jazz-funk than bebop. While aggressive, the music never comes off as irreverent.

Tracks like "Monks Mood," "Well You Needn't" and "Off Minor" are played as if pushed by a pugnaciousness that is more New York brusqueness. Credit Bisio's hand, and the producer's choice to mix the drums upfront. Gauci's choice of notes, as his selection of players dictates this mood. The discovery here is Wessel. He favors a supportive role when Gauci solos, but stitches together a running commentary throughout tracks like "Nutty" and dresses up "Ask me Now," in duo with Gauci, that simply elevates the track into a dream state. Gauci's Thunk! book is a veracious take on the brilliance of Thelonious Monk.