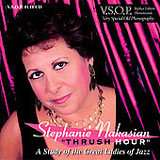 Stephanie Nakasian, who has been recording since the 1980s, has released an ambitious tribute to those singers she calls the "Great Ladies of Jazz." On Thrush Hour, the vocalist tries to connect to each of twenty female vocalists, going back as far as Bessie Smith.

Arranged in more or less chronological fashion, the album is almost like a compilation of the years in which these singers made their respective marks upon the world of vocal jazz. The contributions of Nakasian's septet are invaluable in establishing the settings on Thrush Hour, providing the feel of a post-War Swing session—and even earlier, for the material from vocalists including Bessie Smith ("A Good Man Is Hard To Find") and Ethel Waters ("Guess Who's In Town").

Nakasian is finely detailed in her recreation of the styles of vocal performances including Betty Roche's 1952 bebop take on "Take the 'A' Train," with the Duke Ellington Orchestra and the Anita O'Day-isms on "What Is This Thing Called Love." She also seems to have a knack for blues numbers like Helen Humes' "Million Dollar Secret" and the opening "A Good Man Is Hard To Find," both of which feature the band riffing behind her.

What is, perhaps, most interesting, is the omission of singer Maxine Sullivan as one of the "honorees" on this album, since Nakasian's style seems to come closest to the her. Although crediting "A Hundred Years from Today" to Lee Wiley and "Goody Goody" to Helen Ward, the influence of Maxine Sullivan on these songs seems more apparent. Nitpicking, perhaps, but the only fly in the ointment on this fine tribute.

A Good Man Is Hard To Find; Guess Who