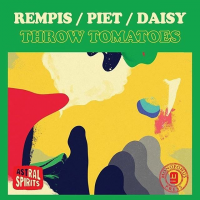 There is something about the trio recording Throw Tomatoes that brings to mind the distinction between yin and yang. Not that there is a clear difference between the two, as in yang yoga and yin yoga, where the same movement can be either (to a degree) and both. In music, a classically trained musician would be considered more yang than yin and an improvisational one, such as Ornette Coleman with his violin performances, more yin.

With musicians such as pianist Matt Piet, saxophonist Dave Rempis and drummer Tim Daisy, the distinctions between yin and yang blur. Piet, originally trained in classical music (yang), switched to jazz and composition (more yin/yang) at Berklee College of Music. Working in free improvisation with Rempis and Daisy, who have been part of the Chicago scene for twenty years, releases yin, but not to the disservice of the yang.

This release follows the trio's Hit the Ground Running (Aerophonic, 2017) and Cure For the Quotidian (Amalgam, 2017). The two lengthy tracks, one recorded in May, the other in July of 2017, have the immediacy of Cecil Taylor's recordings with Jimmy Lyons and Andrew Cyrille. Piet, a relative newbie to the Chicago scene in relation to Rempis and Daisy's twenty plus years of carrying the mantle of the city's creative jazz scene on their shoulders, holds his own here. Actually, he does more than that. His approach to the piano is animated and percussive. At times, it is feral, and he runs off with Rempis and Daisy to join the wolf pack. Each piece is a half marathon endurance challenge. The indefatigable Rempis responds without hesitation, blowing with a ferocity we've come to expect from his horn. Daisy, for his part, takes on the role as anchorman or pundit, responding or prodding his partners with percussive innuendo. Like all great improvisors, the trio turns the ephemeral into the enduring.

To Play Is The Thing; The Thousand Natural Shocks.