Dave Wilson Quartet: Through the Time 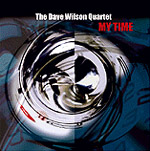 Through the Time is multi-instrumentalist Dave Wilson's first full-length recording. Although the ensemble bears his name, this is very much a collaborative effort—indeed, one reason why the songs all exceed eight minutes (the album itself is a hefty 72 minutes) is because each musician is given equal time and ample solo opportunities.

Wilson makes no secret of his debt to Coltrane, particularly evident when he takes up soprano sax, but he stays well away from any of Trane's radical departures. The album's overall style falls into the realm of smooth contemporary with a traditional bent; patent enthusiasm notwithstanding (the quartet's shouts of encouragement to one another pepper the entire session), Through the Time is polite and well behaved. In this respect it suffers a bit from Wilson's own opening title track. The spicy Slide Hampton chart "Day in Vienna," which follows, might have been a more rousing choice. Steve Meashey's bass solo twists this tune's Latin flair into a funky rumble.

The five standards are just that—standard. While Wilson and his bandmates offer intelligent and certainly heartfelt renditions of Miles Davis' ballad "Blue in Green" and Antonio Carlos Jobim's longing "Dindi," the straightforward treatment doesn't inject anything especially new or interpretational into the compositions. The liner notes mention the ominous coda to "Blue in Green" as an "ode to the new age" but it might have been more interesting to hear how the song developed using the same coda as the starting point. Henry Mancini's "Days of Wine and Roses," what Wilson describes as a "running ballad," in fact runs (or saunters) slightly too long. "Untitled Modal Tune" is Wilson's strongest original chart: a swift, bop-like, swinging number with a simple but effective solo by drummer Jeff Stabley. Wilson's "Bluesio" begins and progresses briskly enough, but the wind-down ending seems awkward and flaccid. For that reason it also doesn't work in the larger sense as the album closer.

There is no faulting the performances, as they're capable and assured throughout. The quartet is tightly integrated, with "Untitled Modal Tune" providing some of the clearest examples of how well Meashey is able to follow and anticipate Reese and Wilson no matter where they happen to go.

Agreeable, if not a bit too prettified at times, there is unfortunately very little to distinguish Through the Time from many other jazz discs in the same genre. That caveat aside, it's supremely heartening to know that, in these dark days of the major label cartel, an independent gigging musician like Wilson can find the necessary support to head into the studio accompanied by friends and likeminded musicians and cut a record to such a respectable standard.