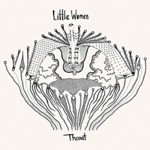 Brooklyn-based quartet, Little Women, blasts out of the starting gate with its full length debut on the Aum Fidelity imprint, following up its 2008 EP. The best known of the group's constituent parts to jazz fans is alto saxophonist Darius Jones, whose Man'ish Boy (A Raw and Beautiful Thing), also on Aum Fidelity, was one of 2009's most widely acclaimed releases. But Little Women is such a team focused group that Jones' back catalogue is not a good signpost for what to expect.

The group's singular sound comes from a strong conception whereby ideas arising from group improvisation, and band members' compositions alike, are subject to joint reappraisal: all of which are sculpted into a continuous uncredited 41-minute suite. Consequently stark juxtaposition, embracing a range of genres, including free jazz, metal, folk, noise and prog, is one of Little Women's defining characteristics. Even when particular styles are utilized, the parameters are carefully controlled to fit with the overall intent. Individual expression is almost totally subsumed within the collective ethos, although guitarist Andrew Smiley is sometimes more prominent due to the ability of his axe to cut through the dense ensembles.

In a program which emphasises contrast, the uncompromising power chords and bombast of "Throat I" segue directly into a hall of mirrors of slow drifting saxophone harmonics on "Throat II." Sometimes the contrasts even come within the same piece, as with "Throat IV" where the two horns begin in folksy Americana hinting at bagpipes sonorities, sketching a soulful hymn like melody which wouldn't have sounded out of place on Jones' album, before tracing a trajectory from consonance to the dissonance of off-key twanging guitar accents and rumbling drums. Similarly on "Throat V" a nervy, episodic opening portends a process of evolution ending with a pretty musical box tune picked out on a single guitar string. Vocal grunts and sighs meld into repetitive patterns before switching up to more rapid cycling of wordless exclamations on "Throat VII": an eccentric conclusion which sidesteps the conventional idea of a climax and, like the rest of this intriguing disc, succeeds in keeping things off balance to the end.