By ROGER FARBEY
November 29, 2015
Sign in to view read count 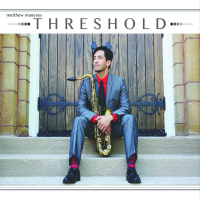 The fast-paced "Speech Perception" offers a dramatic and modal introduction to this album. Tenor sax and trumpet play vibrant solos all underpinned by the rhythm section and solid piano chords, redolent of McCoy Tyner. The mood changes with "Simple Times" which presents an ensemble opening to this pastoral piece embellished by Matthew Muneses sensitive tenor sax solo.

The angularity of "Liminality" conveys a pronounced feel of Steve Coleman's M-Base sensibility, unsurprisingly so, since Muneses has recently had occasion to play alongside and study with Coleman in invitation-only workshop settings. There's also a touch of that other Coleman, with shades of Ornette and Don Cherry interplay between sax and trumpet.

The mid-tempo "Thought Process" opens with a satisfying and well-structured melody played by the ensemble, and proceeds to engaging solos from pianist Steven Feifke and Muneses on tenor. By contrast, "Quiet Reflections" is just that; a ruminative piece, initially led by solitary piano and followed by Muneses' searching tenor sax playing over a tranquil rhythm section.

The languid "Folklore," written by trumpeter Zubin Edalji is the only piece on the album not written by Matthew Muneses. It offers an opportunity for bassist Raviv Markovitz to solo before Edalji offers up a strident trumpet solo and Muneses follows suit on tenor. "Looper's Gold" is a gentle ballad underpinned throughout by lustrous piano, bass and brushed drums, over which Muneses evinces a dulcet-toned solo.

The finale, "Keep Moving" is another appropriately titled mid-paced number, with a strongly memorable melody and also benefits from Feifke here on electric piano, adding a different vital dimension. Threshold is the debut album from this twenty five year old saxophonist and composer from Chicago and benefits from strong, varied compositions and extremely competent playing.

About Matthew Muneses and Jaclyn Rose