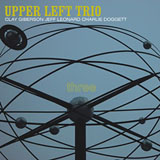 Occasionally, in the midst of media-hyped young lions re-creating and staking claim to past innovations, a jazz recording will emerge that nurtures the essence of tradition with openness and candor. Such engaging qualities can be heard on Three, the third release from Portland, Oregon's Upper Left Trio, featuring pianist Clay Giberson, drummer Charlie Doggett and bassist Jeff Leonard.

Three is characterized by unabashed improvised intensity smoothed over with moments of serene lyricism. Giberson, a dynamic soloist, leads the way with patience, yet demonstrates an acute efficiency for turning a theme inside-out; especially on his own freely developed "Scriab-Ish and the sparse rumblings of "Mantra. The group's hip, left-of-center rendition of "The 'In' Crowd manages to pay homage to the classic trio of Ramsey Lewis without being needlessly overt.

Doggett, a drummer of imagination and curiosity, propels each tune with cunningness and unrelenting swing. The fiery percussionist has a refreshing way of carving out melodious statements while simultaneously providing lucid support to Giberson's playful approach. His take-no-prisoners approach on the up-tempo "Matters of Perception is exemplary.

Leonard approaches the electric bass with upright sensibilities; his tone is thick, with a woody, low-end resonance. Although the intuitive bassist plays a mainly supportive role throughout, his minute-long improvised, and highly melodic foray, "Introduction, sets up the trio for a thoughtful reading of Neil Young's "Don't Let it Bring You Down. Leonard's compositional contributions include the odd-metered "Linguistricks, the bouncy "I See, You See, We See and the floating "Inside an Other.

The most satisfying aspect of Upper Left Trio is one of originality. While the influence of various classic piano trios can be heard, the music on Three speaks to the integrity of a truly unique and collaborative ensemble. Musical clarity, honesty and soulful performances prevail.