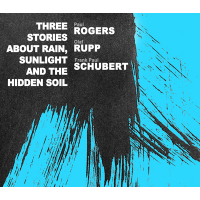 It's always a pleasure to hear expat English bassist Paul Rogers, perhaps best known for his collaboration with reedman Paul Dunmall and the Mujician co-operative. This meeting with two stalwarts of the German improvised music scene in a Berlin studio imparts a particular delight. Guitarist Olaf Rupp boasts a healthy discography including performances with drummer Paul Lovens, reedman Peter Brötzmann and the conductions of Butch Morris, while saxophonist Frank Paul Schubert maintains a roster of forward looking outfits, among them the Fabric Trio heard on Murmurs (NoBusiness, 2013), and an association with pianist Alexander von Schlippenbach, documented on Intricacies (NoBusiness, 2015).

They combine on three long-form improvs, the shortest of which clocks in at just over 17 minutes, giving ample scope for the freewheeling exploration at which all three excel. They take such an egalitarian approach that it's a noticeable event when one drops out. In a favored gambit, Rupp's scratchy staccato guitar textures jostle against extended legato lines from Schubert and Rogers, but that just provides a launching point for further goings-on in which they match dynamics, hit peaks of intensity and negotiate relative lulls where space becomes an integral part of the give and take.

Schubert sticks to soprano saxophone throughout, moving from relatively pure-toned piping to microtonal bleats, corkscrewing excursions and sequences of sustained multiphonics. His upper register antics create a pleasing contrast with Rogers' resonant depths, although the Englishman's custom built seven string bass means that he often shifts into the higher frequencies, particularly when wielding the bow. In fact his distinctive arco playing forms one of the joys of this set, whether fashioning a spectral shimmer or repeating abrasive glancing blows. Rupp's kaleidoscopic palette fills the middle ground, ranging from metallic droplets to grainy swells and everything in between.

Their interaction thrives on well-balanced spontaneous sound placement, which generates a satisfying aural tapestry. Indicative of the active listening are the occasional confluences which anchor the proceedings, such as the tremolos shared by Schubert and Rupp during the lengthy "Rain," or the simultaneous strumming of guitar and bass behind Schubert's soprano slurs on "Yeast." "Curry" contains both some of the most reflective passages and as well as some of the most bristlingly dense, but each cut proves a breathtaking blend of individual expression and group cohesion.