By GREG SIMMONS
February 5, 2011
Sign in to view read count 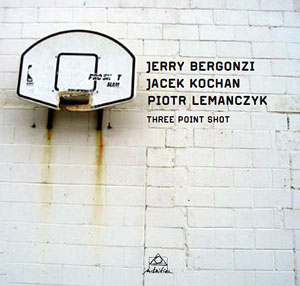 Musicians often benefit from the stimulus provided by a interacting with a new group of cohorts. If nothing else, personnel changes can remake the creative process and offer dramatically altered results. In an art form like jazz, that leans heavily on improvisation, this can only be a good thing. It is, therefore, a pleasant surprise to hear tenor saxophonist/educator Jerry Bergonzi working with an altogether different rhythm section in Europe, consisting of two Polish musicians. Better still, this trio has released Three Point Shot.

A trio album leaves no place for the lead instrument to hide. In this case, Bergonzi's horn is proudly out in front, turning in a no-apologies performance. The man is simply brilliant, but the record is somewhat of a departure musically. The tunes are clearly informed by a more experimental, European improvisational bent. This is smart jazz, with fewer overtly stated melodies than on Bergonzi's excellent Simply Put (Savant, 2009). Where that record was essentially a straight-ahead affair, Three Point Shot clears the room of extraneous furnishings, leaving the musicians free to perform some pretty deep improvisations against music that might be described, at its most structured, as modal. "On Again Off Again," begins with Bergonzi briefly stating a trio of four-note ascending scales, before breaking it up and expanding the grouping into a string of staccato phrases.

The album has a very collaborative feel; certainly, Bergonzi's tenor is the melody maker, but the contributions from the rhythm section are significant, both in the playing and the writing. Drummer Jacek Kochan and bassist Piotr Lemanczyk contribute four of the eight tunes between them, and are showcased on virtually every track. Lemanczyk's "Cup of Joe" establishes an avant-garde walking bass line, setting up a pulsing blues. Kochan is a creative drummer with a flair for subtle additions: a short, quiet press roll here; a brush drawn across a cymbal there. He's an impeccable timekeeper, even when he's layering several signatures at once.

It would be a shame if Three Point Shot turned out to be a one-off project for this great trio. This is a solid band that adds another dimension to Bergonzi's repertoire and it deserves to be more widely heard.