By EYAL HAREUVENI
August 5, 2012
Sign in to view read count 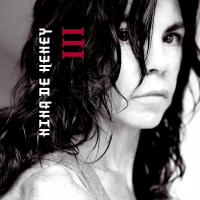 Three is the third solo double bass recording of by underrated Swedish double bassist Nina de Heney, known for her collaborations with pianists (and fellow countrymen) Sten Sandell and Lisa Ullén. The title refers also to the connection between de Heney, the player ("the dancer behind the bass," as she calls it), the intimate connection with the instrument (her "extended body"), and the room (a "vibrating and dancing entity, guiding the music").

On this double album, de Heney explores different aspects of her instrument through varied extended techniques, all captured beautifully by engineer Johannes Lundberg. She creates a hypnotic repetitive theme with the strings on "Cerebella mill." On "Eeadrum Peak," the bass sounds like a choir of percussive instrument when de Heney uses her bow to hit the strings and her hands to touch the wooden body. "Sang as mojo nuns" unfolds patiently, a dramatic search for a balance between silence and short, resonating, and often percussive sounds.

On the playful "Miracle bell line," de Heney turns the bass into a sophisticated version of the Brazilian single-string percussion instrument, the berimbau. "Karma deer up" is a brilliant exploration of multiphonics. through decisive arco playing that makes the bass sound like a few string instruments. On "Rev dong lick," she pushes the bass into otherworldly sonic terrain with radical usage of the bow. The methodical and gentle use of arco as a percussive element on "Brilliance ell" suggests a melodic line; "Crab lime line" goes even further, resembling a fiery, flamenco piece, while the emotional closer, "Label recline," with its repetitive soft touches of bow on strings, sounds like a farewell lullaby.

De Heney's rich imagination, fast instincts, assured and distinctive command of the bass and total surrender to the moment of improvisation are explored best on the longer free improvisations such as "Liberal Cell: Mine" and "Drama peruke." On these improvisations, she struggles with the bass and caresses it, turning it into a sensual body with her passionate and intuitive playing. These masterful improvisations put de Heney in a league of her own in the elite of solo double bass improvisers such as Joëlle Léandre, Barry Guy, Mark Dresser and Barre Phillips.

A brilliant achievement by a highly unique player.