By BRUCE LINDSAY
November 26, 2012
Sign in to view read count 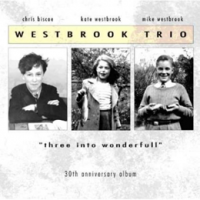 The Westbrook Trio celebrates thirty years of music making with three into wonderfull, a retrospective covering the years from 1983 to 2012. Pianist and composer Mike Westbrook, vocalist Kate Westbrook and saxophonist Chris Biscoe have pursued an uncompromising path through the three decades since forming the Trio, crafting music that can be both beautiful and challenging. Mike Westbrook has long been one of the UK jazz scene's most impressive composers, working equally successfully with small ensembles and big bands

three into wonderfull documents a band that emerged with its style almost fully formed and which has, over the years, kept close to this original blueprint. It's a blueprint that finds space for Mike and Kate Westbrook's original songs, for the pianist's arrangements of poems like Adrian Mitchell's "Apple Pie," Paul Eluard's "L'égalité des sexes" and Arthur Rimbaud's "Enfance," and for the occasional classic songbook number such as Billie Holiday and Arthur Jr. Herzog's "Don't Explain." Most of these songs have already appeared on Westbrook Trio releases, but there are also four previously unreleased tracks from 1994 and 1995, plus a new song, "Brazilian Love Songs," written by Mike and Kate Westbrook and recorded in 2012 by the Trio's long-term collaborator Jon Hiseman.

The Trio's approach is described in the sleeve notes as "jazz cabaret." Clearly demonstrated on the lengthy and previously unreleased "Traurig aber falsch," it takes its cues from experimental theater and from the politically-charged cabarets of Europe, not from the slick dance and cocktail cabaret scenes of New York or London. This tough, powerful, approach to performance doesn't always make for comfortable listening, but there's no denying the Trio's commitment to the songs.

Kate Westbrook can be a mesmerizing singer, fully immersed in the narrative, living the life of the character she represents, singing in English, Italian or French as the song requires. On "L'égalité des sexes," "Apple Pie" and "My Dull Eyes Weep" she's hypnotic, investing the lyrics with total commitment. This intensity can also impact negatively on the narrative. A song about the killing of a Derbyshire family in the '70s, written by the Westbrooks in the style of an eighteenth-century murder ballad, "The Ballad Of Billy Hughes" has plenty of macabre impact but a subtler, more restrained vocal might better serve the lyric. On Bessie Smith's "Good Old Wagon," her adoption of the style of an old-school blues shouter is unconvincing. Biscoe is excellent throughout three into wonderfull. As a musical partner for Kate Westbrook's voice he is consistently empathetic: as a soloist his command of dynamics and tone ensures inventive and emotionally powerful playing.

The previously unreleased "Don't Explain" (recorded in 1994) is stunning, with all three musicians excelling. Biscoe's alto solo is fluid and romantic, Kate Westbrook sings with more than a hint of anger as well as anguish, Mike Westbrook's rich piano accompaniment heightens both his band mates' contributions. This superb performance readily justifies the album's title on its own.