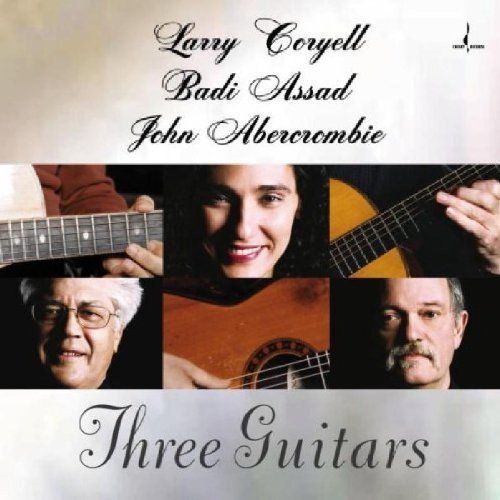 The "guitar summit" genre is densely populated these days, but few of these multiple-guitar, multiple-ego records are terribly inviting. There is a difference between good playing and good music, the latter being more difficult to produce than the former. The new Chesky release Three Guitars, combining jazz guitarists Larry Coryell and John Abercrombie with the Brazilian composer/guitarist/vocalist/body percussionist (really!) and all-around phenomenon Badi Assad, is thankfully one of those rare records from which the loveliness of the music is absorbed long before any brilliance in the playing is recognized.

This is not strictly a jazz record; the tone modulates on the spectrum running from light jazz to the guitar music of Assad's native Brazil, to classical music. The danger with this approach is a descent into New Age blandness, with endless noodling over breezy, repetitive chord progressions. But the three guitarists mostly avoid this trap through clever arrangements, which feature Coryell's and Abercrombie's steel strings forming interlocking patterns with each other and with Assad's nylon string guitar. Coryell apparently worked with Assad in preparation for the session, and it shows: the continual melodic inventiveness and contrast between the guitarists' sounds and styles elevates the album above its peers in the genre.

While both jazzers play well (with Coryell sounding particularly at home), the record is dominated by Assad's talent and personality. Her compositions are the most hypnotic and her strategically introduced wordless singing, mouth and body percussion, and "copper flute" (which sounds something like an electronically-processed songbird) spice up the music just when it is in danger of sounding "same-y."

She begins the opener, "Seu Jorge E Dona Ica," on kalimba, ripping off a jazzy little stop-time solo before picking up the guitar for a lyrical intro that leads into the tune's lovely main theme. Coryell's "New Lute Prelude/Interlude" introduces a wonderful sound, with him and Abercrombie playing in harmonized unison over Assad's rolling arpeggios. "After The Rain" (by Assad, not the Coltrane tune!) has a mesmerizing, folk-blues flavor to it, while Abercrombie's "Descending Grace" is the most jazz-like tune, thanks to Assad's hand-clapped rhythm and Coryell's comping underneath the composer's solo.

The recording, made last winter in a New York City church, is up to Chesky's usual high standards. The sound is full and realistic without being overly resonant, and the stereo placement (Coryell on the left, Assad in the middle, and Abercrombie on the right) maximizes the intelligibility of the three guitarists' lines. While a bit over-long at 58 minutes, Three Guitars contains many moments of undeniable beauty and invention. The listener in search of pleasant "background" music that nevertheless repays close "foreground" listening could hardly do better.