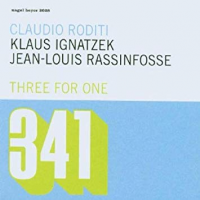 While listening to the first track on Three for One (341) by Claudio Roditi, Klaus Ignatzek, and Jean-Louis Rassinfosse, I stopped to check the credits to find out the name of the drummer who was playing so delicately. I quickly remembered that there was no drummer, but I thought I heard some slight brushwork, anyway. And that's one of the real strong points of this percussion-less trio: they utilize space in a way that stirs up the ephemeral, subtle sounds that otherwise lurk buried beneath the mix—if you listen closely, you might hear bass strings vibrating, a trumpeter breathing lightly.

Songwriting credits on 341 are split almost evenly between pianist Klaus Ignatzek (five tunes) and trumpeter Claudio Roditi (four). "On Green Dolphin Street," the sole cover, provides some balance. Ignatzek's compositions have a familiar post bop feel, while a few of Roditi's offerings on 341 have a Brazilian edge (he even adds some vocals on his own bossa "Sem Falar"). Ignatzek's a strong writer, but some of his tunes sound a bit too familiar; the effortless calypso number "Avocado" is one of them.

The trio are a living example of the power of jazz's global reach: two Europeans and a Brazilian, all playing distinctly American music. There are, however, some blatant and subtle hints of the musicians' origins—Roditi's Brazilian compositions and Ignatzek's "Gypsy Groove." Flemish bassist Jean-Louis Rassinfosse is the pillar upon which the whole arrangement rests, keeping things rooted while the other two garnish tracks with frequent soloing.