By GEORGE KANZLER
February 7, 2010
Sign in to view read count 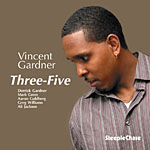 The title here refers to both trombonist Vincent Gardner's age and the time signatures (3/4 and 5/4) of the majority of the tracks on this CD. Gardner says the "idea for the date was to try these pieces in a different meter. It's amazing that when you drop a beat and take a tune usually played in 4/4 down to 3/4 its character changes and therefore you respond differently." It's not really that straightforward; Gardner doesn't simply cast pieces in a steady 3/4 or 5/4 like Dave Brubeck or the early hard boppers did, but takes liberties with rhythms within the meters as well as delivering fresh, often intricate arrangements reimagining more familiar tunes. A case in point is his fugue-like recasting of Sonny Rollins' "Valse Hot," dispensing with full rhythm section during the theme and changing up rhythmic emphasis while maintaining the kernel 3/4 during solos.

Seven of the nine tracks are from a sterling sextet with brother Derrick Gardner (trumpet), Mark Gross (alto and soprano sax), Aaron Goldberg (piano), Greg Williams (bass) and the inventive drummer Ali Jackson. All arrangements are by the leader and include a Bobby Timmons' "Dat Dere" deftly waltzed with tango accents; Lee Morgan's "Morgan the Pirate" in lilting swing; Tommy Turrentine's "Long As Your Living" in a fleet, swing-feel 5/4 contrasted with James Black's "Wee Dee" as rocking mid-tempo 5/4; Wayne Shorter's "Sweet 'N' Sour" as a bright waltz and Bobby Hutcherson's "Little B's Poem" kept in an oddly accented 4/4. Shorter's sinuous "Iris" is a trombone-with-rhythm track with a slow, vaguely 3/4 feel. And "I'll Never Smile Again" takes a cue from the late Richie Powell's hard bop revampings of standards like "I'll Remember April" for Clifford Brown and Max Roach, with Gross laying out and the two brothers voicing the crackling fast theme.