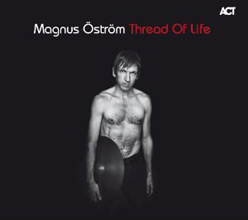 Thread Of Life is drummer Magnus Öström's debut as leader, after 15 years with the Esbjorn Svensson. e.s.t. was one of the most successful jazz ensembles ever to emerge from Europe, gaining not only critical acclaim but also commercial success. It's a hard act for Öström to follow, and it's to his immense credit that, after a sabbatical from the scene to reflect on his plans after Svensson's tragic death in 2008, Öström has gathered a talented new band around him and created a work of great beauty and humanity.

The tune that is likely to garner the greatest interest is "Ballad For E," Öström's tribute to Svensson, on which he is joined by e.s.t. bassist Dan Berglund and occasional e.s.t. guest musician, guitarist Pat Metheny. It's an exquisite tune, played superbly by the trio. Metheny arranged the song and his acoustic guitar playing, with its hint of Americana, is some of the loveliest he has ever recorded.

While "Ballad For E" is undoubtedly a triumph, Thread Of Life contains other tunes that are equally affecting and just as lovely. "Hymn [For The Past] Part II" is an extended ballad, with a soulful and reflective mood reminiscent of some of Krzysztof Komeda's work. The most lushly melancholic tune here is "Longing," a flowing ballad that combines Gustaf Karlöf's piano and Andreas Hourdakis' electric guitar with Öström's smooth drum patterns to create a mood that is accurately reflected in the title.

There's a more upbeat feel to the album too, most obviously in "Piano Break Song;" driven by Öström's fluid drumming; and the insistent hand-clap and wailing, wordless, vocal of "Afilia Mi." Despite its title, "The Haunted Thoughts and the Endless Fall" is another of the more up-tempo tunes, although this time the staccato keyboard rhythm builds tension under Hourdakis' snaking prog-rock guitar.

Öström has described "Longing" as having sadness, but also hope. It's a fitting description of Thread Of Life as a whole. The album is clearly influenced by Öström's recent loss—its stark, monochrome, cover design emphasizes this aspect—but it also shows how he is now looking to the future: with hope and optimism. The beauty of Thread Of Life arises from its ability to capture these emotions with grace.