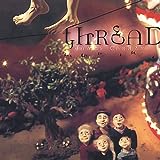 James Carney is a musical polyglot knowledgeable in various idioms, and he exploits this fluency on Thread. While his previous works featured formidable horn sections, Carney has scaled down to a trio this time, featuring Dan Morris on drums, while Todd Sickafoose and Dan Lutz share bass duties.

The disc opens with the first part of "Grassy Shoal Hoedown", which features a splendid dialogue between Carney and Morris that continues on the second part of the tune as Morris's restless percussion percolates beneath Carney's two-fisted flurries. The rhythm soothes, drives, and ultimately screams. "La Guerra Nueva" is a haunting ballad that has a moody, introspective opening by Carney. Lutz plucks a brief, understated solo that leads into a mid-tempo Latin groove, and the song ends with stunning abruptness. "Louisiana Raga" is an Indian/Cajun blend, its ominous undercurrent laid out at the top via a bowed solo by Lutz. "In the Years Since", the first of two improvisations by Carney, Harris and Sickafoose, finds the trio moving slowly and carefully in search of a connection; the other improv piece, "Politicking", is more sure of itself, with Morris whipping delicious licks off the rims of his snare. "Pearlblossom Heights" is a slow, flawless excursion into the kind of gated community occupied by Brad Meldhau.

Carney started comparatively late in jazz but his playing and composing have grown exponentially. He can play with the most delicate embroidery, unleash a torrent of notes, or employ spartan phrases tinged with Monkish mischief. As for his sidemen, Morris is an absolute whirlwind, and Lutz and Sickafoose provide solid underpinnings on the bass, confident in the moments when they move front and center.

The cover photo of Thread depicts a group of enraptured figures gazing at someone funambulating above them, an image which encapsulates the spirit of this inventive, rhythmically challenging, wonderfully diverse work. Carney invites us to join him on the tightrope. He knows it's not necessarily safe there, and that's the most compelling reason to take the chance.