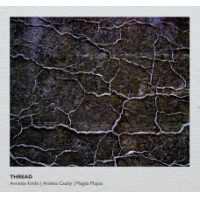 Thread features two contrasting tracks by the Berlin-based threesome of guitarist Annette Krebs, cellist Anthea Caddy and pianist Magda Mayas. "Sands"—the shorter of the two at under ten minutes—was studio-recorded in Berlin in 2008, while the 26-minute "Shore" was recorded live in concert in Boston in 2009. Despite their differences, the two tracks are similar enough to fit together well, giving a clear and consistent picture of the trio's music. Before the three came together, Mayas and Caddy played together as a duo—as heard on the fine Schatten (Dromos, 2011)—and so, too, did Krebs and Caddy. Consequently, the three sound familiar and comfortable with each others' playing.

Throughout Thread, as on that Dromos duo, Mayas plays her usual combination of inside and outside piano, while Caddy similarly extracts the instrument's full range of sounds from her cello; both play acoustically with no use of electronics... although each can occasionally produce sounds that could be electronically generated. Of the three, Krebs is the joker in the pack, the one who makes greatest use of electronics and whose sounds most color the album. Typically, she makes extensive use of taped sound samples, most notably random snatches of recorded speech, which add a surreal edge to proceedings.

Krebs uses those voices sparingly on the studio-recorded track, which is a paradigm of trio improvisation. The music circulates around between the three, each in turn taking the lead, with dramatic variations in volume and attack. They are all adept at finding appropriate sounds to create tension and then to release it, giving the whole piece an episodic feel as well as a pleasing sense of ebb and flow.

The transition to the live recording is an easy one; the 2008 track could almost have been designed as a prelude to the 2009 one. The characteristics of the shorter track are replicated in the longer one, with the proviso that the recorded speech tends to be more dominant—no bad thing, as it gives the piece a recurring theme running through it. Throughout, interactions between Krebs' electronics and the two acoustic instruments are well-judged and dramatic, their contrasts highlighting all three to good effect. Although the album runs for just under thirty-six minutes altogether, by the end it feels far longer—long enough to give a satisfying feeling of completeness and closure.