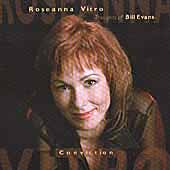 A few years prior to his passing back in 1977, pianist/composer Bill Evans prompted vocalist Roseanna Vitro to vacate Houston, Texas for greener pastures in New York City. Since then, Ms. Vitro has gained prominence as a clinician/educator and performer. With her eighth recording titled Thoughts of Bill Evans –Convictions, the artist sets ten Evans compositions to lyric, amid two originals. And if you can get past the first tune (“My Bells”) without hitting your compact disc player’s repeat button, each subsequent piece should provide continual delight as this newly released production translates into one of the most charismatic tributes of the year.

Featuring ex-“Bill Evans Trio” bassist, Eddie Gomez, pianist Fred Hersch and others, Ms. Vitro effortlessly sings through a series of often irresistible story-lines along with brief interludes consisting of sanguine harmonies and melodious scat vocalise atop the band’s cheery demeanor. Here, she lives the experience whether performing a bouncy swing vamp on, “Funkallero”, or reaching out to our soul’s in concert with subtle inflections and spirited prose on “Only Child”. All told, the musicians’ furnish sympathetic support as the vocalist’s effervescent Bill Evans tribute boasts a cavalcade of bluesy themes, hybrid Latin/jazz rhythms and glittering lyricism, yet it’s all about a distinct touch of class. Thus, Roseanna Vitro’s homage to an influential jazz master, looms as a sterling and ebulliently produced effort, earmarked by her unyielding convictions set to song! Highly recommended.

My Bells, Remebering the Rain, Two Lonely People, Prelude To A Funk, Funkallero, Only child, Conviction, Turn Out The Stars, Waltz For Debbie, In April, Very Early, Letter To Evan