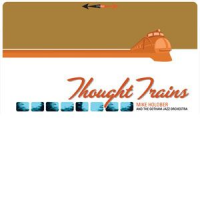 Mike Holober's not just another pianist working within long-established post-Bill Evans methods, he's one of the rare very individually creative ones. Given his more monumental approach, his Gotham Jazz Orchestra can seem something of an extension of his piano work. His orchestration sometimes fills out a piano conception, sometimes interacts with his playing, piano concerto fashion. A band member's solo will sometimes have the full orchestra, sometimes the at times equally full-sounding rhythm section, in accompaniment. Planned and grand. With Holober's piano and Ron Carter's bass, this had to be a high-power section.

It's plain this band could make an uncommonly huge noise, deafeningly much louder than it ever does here. It owes its strictly musical power to a tension between puissance and control. No revolutionary ensemble, it's more in the line of Duke Pearson, Toshiko, Mel Lewis, Brookmeyer, and Slide Hampton than that of Bley, Mingus, Gil Evans, or anything pre-1950. The liner notes make too much of the train reference in the title. There's nothing ostensibly train-like. Holober may however have distilled from train sounds the various rhythmic patterns which sustain the required forward movement in performance of what are long charts. Beside the distinctive rhythmic aspect, there's very resourceful handling of counter-voicings, concerted passages with interplay between sections of the band, all keeping things going through one section of a composition and another.

Carter's the standout soloist, with his feature "Waltz Medium" also something of a concerto for Holober's piano, too. The theme resembles, among other things, Mingus's "Original Faubus Fables."

Pat Hallaran's large-scale trombone sound is heard in the first and last solos in a set designed as a continuous work; Scott Wendholt is a powerful and lyrical trumpet soloist.

Rhythmic variety is further stimulated by individual voices popping out of ensemble, sometimes oboe, as well as piccolo and clarinet. This isn't a music of immediate impact, but mainstream and complex, thought-dominated, with body. Holober does not use the band to show off his piano playing. This is big stuff, but never showy.