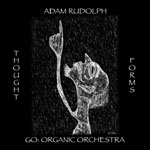 About a minute and a half into "Mirrors," track two on Thought Forms, the distinct voices of Adam Rudolph's Go: Organic Orchestra begin to blend. Percussive tongue slaps, growling flutes and slashed cymbals collect in a glowing sonic aggregate; overtones arch up, out and over the thirty-plus member band. The effect is otherworldly and, like everything else on Thought Forms, fleeting.

Rudolph describes the music on the orchestra's fourth album as "a suite with interludes of calligraphic bridges. Romances, that [express] emotional colors and a moving picture for the mind's ear." The percussionist, composer, conductor achieves this in twelve concise tracks by varying moods and grooves, trusting his performers and exploiting his orchestra's vast, vast timbral palate.

With fifteen woodwind players doubling on every conceivable variety of flute, a battery of percussionists, four acoustic bassists and a full string section of violin, viola, cello, electric guitar and harp, Rudolph has no shortage of options and he marshals the full force of his band with the perfect mix of assurance and restraint. The ethereal "Mirrors" is brought into sharp focus by the hypnotic, percussive feel of "Overture" and "Axis," the pieces that bookend it, in a method that anchors more esoteric material to brief, infectious grooves. This works wonders at the album's midpoint when the flitting, impressionistic "Interior" is followed by the dissonant, polyrhythmic groove of "Circular."

In addition to channeling the potentially unwieldy elements of his orchestra into condensed ensemble passages, Rudolph allows individual voices and duos to occupy the foreground in a number of pieces. "Kaleidophone" is a spiky vehicle for Emily Hay's flute and "Atmos" pairs Harris Eisenstadt's rippling percussion with Jeremy Drake's minimalist guitar. These episodes are more accent than feature and each performance is contained enough by Rudolph to maintain focus and momentum all the way to the transcendent conclusion, "River Run."