Whirlpool: This World and One More

By EYAL HAREUVENI
December 10, 2013
Sign in to view read count 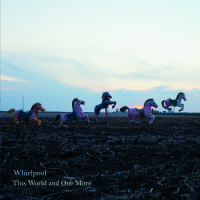 The collaborative Chicagoan trio Whirlpool aims to eliminate the boundaries between composition and improvisation. Its musicians—alto saxophonist Caroline Davis, also a vocalist who performs world music, hip-hop and folk-Americana; drummer Charles Rumback, a member of Colorist and collaborator of cellist Fred Lonberg-Holm and guitarist Jeff Swanson- -are versatile musicians, leaders of their own outfits.

The nine pieces on the trio's debut recording feature clear and constant emphasis on form and a strong melodic core as the basis for the improvised parts. Still, none of these pieces follows conventional forms in terms of rhythm or structure. The interplay is open, patient and emphatic, demanding equal contributions from the three musicians.

There are few exceptions in the calm interplay of the trio. "Dragons in Denver," shifts between tense and intense passages, alternating rhythmic concepts and spare parts. On the touching "whirlpool" Davis leads the trio, telling an emotional story, supported with subtle touches of Swanson and Rumback. Swanson and Davis charge the trio with unusual swinging energy on "Spark" and the reserved and nuanced cymbal work of Rumback dictates the soft atmosphere of the ballad "Herb and Dolores." The last piece, "That Day," suggests a cinematic narrative with its dramatic shifts of spirit and energy.

Whirlpool is a promising trio with its own sound. Still, it sounds as if it would benefit from more open and energetic interplay.