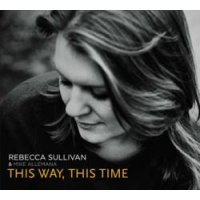 The great composers of the jazz standard repertoire had lesser-known contemporaries whose work although of quality, inevitably did not garner the same attention. This body of somewhat unknown jazz compositions offers the up-and-coming jazz artist a wealth of material to choose from when trying to assemble that most important debut recording.

Chicago-native vocalist Rebecca Sullivan does just that and selects from this less celebrated pool of music for her debut This Way, This Time. Accompanied by guitarist Mike Allemana, who also practices sonic loop alchemy, Sullivan's delicate soprano weaves its way through near-standards like the Johnny Mandel—Peggy Lee composition "The Shining Sea" and the Johnny Mandel—Dave Frishberg song "You Are There." Sullivan spins her airy vocals over Allemana's exacting guitar on Hoagy Carmichael's 1947 composition "Ivy." While these songs have been covered, they have not been jettisoned into the standard jazz canon like "My Funny Valentine," which is just as well, as familiarity often breeds musical contempt where overplayed standards are concerned.

This is stripped-down music that is as organic as it is ethereal. Sullivan makes her distinctive high coquettish voice work with this material, while Allemana provides unique support drawing from a broad array of musics including Bossa Nova, Latin, and mainstream jazz.

This Way, This Time; The Shining Sea; She Moved Through The Fair; Wouldn't It Be Nice; Some Kind Of Love; Blossom Friend; Human Racing; Strange Enchantment; Ivy; You Are There.