Objets Trouves: This Side Up 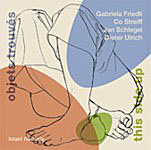 It's only right that this group didn't come together under the name of one of its members as this is cooperative music of an order that's still only too rare. This is Objets Trouves' second title for Intakt, indicating that the label seems intent on a long-term relationship with them. If so this is a good thing as their music is shot through with a shared method of communication that makes no modest case for the positive aspects of the human spirit.

Hyperbole that might be but, when the music comes together in the manner that it does on "mehr Rosinen," it's justified. The electric bass guitar is clearly the instrument necessary to accommodate Schlegel's extended instrumental vocabulary, and here he sounds like a man intent on subverting, say, Jaco Pastorius's virtuosic bluster; strings are damped to the point at which they sound percussive, and his tricky unison flourishes with Streiff on alto sax are a joy.

Streiff too has her own thing going on. The tartness of her soprano sax tone isn't leavened in any way by Lee Konitz's liquidity, for example, and "En Gedi" gives her the opportunity to put out her own brand of lyricism. This piece is also testament to how attuned to the group's dynamics Friedli the composer is. Her piano too is something else, both here and elsewhere. Owing no great debt of stylistic allegiance has always been as good a means as any of stating the case for one's individuality and she reconciles great delicacy with subtle wit in a manner that many can perhaps only dream of.

She can get percussive too, after the manner of Herbie Nichols but with a notably different aesthetic underscoring. The duo of her and drummer Dieter Ulrich which makes up the very first moments of "Salz in kleinen Dingen-Objets" acts almost as a kind of facile preamble to the group's talents, but that perhaps negative impression is transformed when Schlegel comes in and the three musicians undermine the idea that the piano trio can be a context only for sterile technical display.

The offbeat intervals of the first moments of "Guscht" are entirely at odds with what follows, but in this case the discontinuity is but an element in a greater whole. The mood is reflective, at times, while at others the music embraces something as close to the mainstream as it gets in this context. The ambivalent attitude towards "the tradition" this implies is marked by a sense of humor too, something which is always welcome.

Title: This Side Up | Year Released: 2009 | Record Label: Intakt Records