Patrick Cornelius: This Should Be Fun 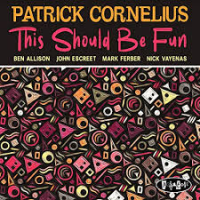 This Should Be Fun occupies middle ground between the various modes of experimentation that infuse present-day jazz, and a fealty to traditional practices. Alto saxophonist Patrick Cornelius and an exceptional band of peers haven't completely abandoned twentieth century jazz orthodoxy, yet their work doesn't flaunt or reference specific, easily recognizable influences. If you're looking for song quotes in the midst of solos, wish to explore the relation of Cornelius' compositions to those by canonized composers, or need to match the improvisational styles of individual band members with those of heroes on your favorite jazz records, this may not be the place to land. On the other hand, there's an abundance of good things happening on several levels, more than a few moments of individual and collective brilliance, and every one of the ten tracks delivers an interesting, emotionally resonant tale.

Each of Cornelius' compositions possesses a distinct personality that invites close scrutiny. It is clear that he has put a lot of consideration into the structures and melodies. By and large, the compositions are not in any hurry to reach a destination or to unleash the soloists. The majority of them unfold carefully and patiently, often including catchy figures for John Escreet's piano which precede or overlap a melodic line played by Cornelius' alto alone or in tandem with trombonist Nick Vayenas. (Vayenas contributes "Dissolution," which is very much akin to the rest of the record.) The tenor of Cornelius' songs ranges across the friendly, affable feel of "Leaving Paradise," the swampy, New Orleans vibe of the title track, the bracing optimism of "Restless Willow," and the serious, solemn tone of "Precious Souls" and "For Morgan."

Cornelius, Vayenas and Escreet, the record's primary soloists, are all capable of taking their sweet time to ease into an improvisation, or of conveying a sense of exigency from beginning to end. "Big Pictures" and "Leaving Paradise" are good examples of Cornelius' ability to combine a tart, edgy tone with smart organization in the structuring of his lines. In short, he sounds wired and thoughtful, organized but not contrived. A funk-fused turn on "This Should Be Fun" includes a stutter-step entry, short, carefully positioned cries, and pits a terse, high note phrase against a reply that sounds a lot like a duck call. "Dissolution" is one of the tracks in which his tone softens somewhat, silences are utilized, and he instantly picks up on one of bassist Ben Allison's coiled bass lines. Vayenas often projects a fat, buttery tone that sometimes yields to the uniting of short, scrappy, rough-hewed phrases. During "One Shy Of A Dozen," he pushes and pulls against the rhythm section's steady pulse, barks, growls and spits out terse ideas, and eventually boils over with bent, twisted shrieks. Escreet often stretches the fabric of the music and then rapidly falls back into place as if nothing out of the ordinary has occurred. At the onset of a solo in "Big Pictures," he resembles an antic musical wind-up toy. A turn on "Like Kenny" begins in something like a dream state, and then becomes more direct and pronounced. Escreet also has the track's last word, executing manically busy, run-on figures in the piano's upper register.

Allison and Mark Ferber make an exemplary bass and drums team for sounds that favor substance over easily-defined style. They put a brisk, efficient spin on everything Cornelius throws at them, concocting grooves without a hint of clutter or excess. Allison and Ferber constitute an essential part of animating compositions filled with hooks, guideposts, and smart designs. This Should Be Fun is a persuasive, memorable recording.

Big Pictures; Leaving Paradise; This Should Be Fun; Precious Souls; Telescope; Dissolution; Restless Willow; Like Kenny; One Shy Of A Dozen; For Morgan.