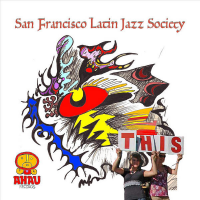 The San Francisco Latin Jazz Society is standing all by its lonesome in a corner of the jazz room. Filling a largely ignored niche, SFLJS channels late sixties Latin jazz à la Gato Barbieri and fuses it with the rock-jazz fusion that rose to prominence in the seventies with bands like Mahavishnu Orchestra and the Love, Devotion, Surrender (Columbia, 1973) collaboration between guitarists Carlos Santana and John McLaughlin.

On its previous release, Now What (Scott Brown Music, 2011), SFLJS kept a course bordering close to the avant-garde territory to which Barbieri led his ensemble on the seminal In Search of the Mystery (ESP, 1967). On This, however, the SFLJS's focus is heavier on the '70s psychedelic trip-jam. The result is a series of compositions with hazy riffs, intoxicating vamps and billowy grooves.

The title track opens the album with drips of keyboard and drops of percussion that grow into a cascade of guitar lightning and trumpet thunder. "For Demian" follows, starting with a languid sense of peace that builds up to anthemic shouts to the skies above. "Mambo Psychedelic Blues" tosses fire in all directions, but it's the casual loping bass lines that drive the tune. "Right Here" bounces along with a buoyant groove, even as guitars slash across the rhythms with razor sharp distortions and keyboards scatter skewed notes around the melody like rose petals. "That" provides for some strong soloing over infectious Latin rhythms. The album finale, "Amen," is a boiling cauldron of notes that cooks itself away and ends with steamy wisps of flute.

Listening to a disparate amount of jazz, the development of the music over time becomes apparent. It's an exhilarating sensation to hear an album that has stepped outside of the jazz timeline and recorded music that has a heart beating in the present day yet with an old soul sound. This is deliciously nostalgic to a time of vast musical experimentation, and the San Francisco Latin Jazz Society imbues this sound with a modern voice to make for some very compelling music.

This; For Demian; Mambo Psychedelic Blues; Right Here; That; Amen.