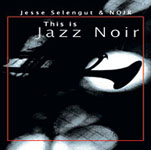 Trumpeter Jesse Selengut & NOIR use reverb, synths, samples and contemporary mixing techniques to create a fascinating situation. They've latched onto the electronic adventures of trumpeter Davis with a fanatic desire.

With a program of modern mainstream originals, Selengut enjoys the opportunity to express through mixed media. The eclectic sounds of his quartet come from electronic keyboards and bass, a fiery drummer, and the leader's soulful trumpet. Guest Donny McCaslin brings his tenor saxophone to the forum for "Follow and "The Armeer Story.

Daniel Kelly's Doppelgänger represents the session's darkest side through a slow-moving process where keyboard stretches out with anxiety while the other members of NOIR temper with complementary tones. Several pieces drive faster, and some include a merry, hip-hop façade; however, the unit never strays too far from what Miles Davis gave us during his electronic period. They're on the button with their jazz chops.

Selengut has scored several motion pictures. His dedication to the passion inherent in jazz makes a suitable impression. With the moods on This is Jazz Noir covering a lot of territory, we get a wide spectrum of emotions. "Roses turns out to be the prettiest of the program, with its melodic flow and plaintive trumpet cries. "Follow represents a happy rhythmic flow, while "Deadpan adds the funk of a tightly muted trumpet with backbeat. Trumpeter Selengut gives us a dark and moody album that turns creative with a positive flow. Progressive-minded jazz fans will enjoy it.