Zebulon Cafe Concert: This Is It: Live at Zebulon Vol. 1 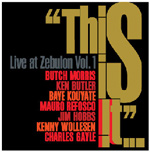 A pure joy of harmonious cacophony, oxymoronic as that may be, best describes the opening few minutes of This Is It—a raucous twelve-bar blues by Butch Morris' improvising orchestra, Butchland Band. Titled "BCW and built on a simple blues riff, the thirteen-minute orchestral party is a fine example of why the Williamsburg jazz cafe has in such a short time established itself as a major venue for improvised music in New York City. And Live at Zebulon only gets better from there. It is a capsule of remarkably rich music happening at a scene where the "one-string golf club sitar-tabla is as valid a vehicle for improvisation as the trumpet.

The ensembles on this collection range in size and style from the Charles Gayle Trio and its swirling maelstrom of free jazz to the septet Forro in the Dark's hip-shaking and hypnotizing Brazilian groove, to Kenny Wollesen's sixteen-piece band S.L.A.M. and its melodic anthem "Until the Rain Comes, featuring a superb soprano sax solo by Sam Newsome and a band member shrieking poetry lyrics.

It is surprising to hear relatively sparse clapping at the culmination of some of the album's tracks. But it's a reminder that on some nights entering the cafe feels like being let in on a well-kept secret. Other nights, of course, the secret is out and it's elbow to elbow, just what one would expect for music of the caliber showcased on Live at Zebulon.

BCW; The Mackie Brunette; Par Twelve; Mali Sadjo; Unto the Lord; Pop Corn with the Incidental Music Pipoca Moderna; Until the Rain Comes.