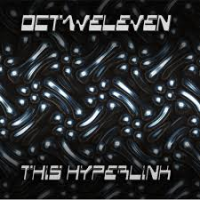 Hailing from Santa Fe, New Mexico, the all-instrumental keys— bass—drums trio Octaveleven presents a dynamic blend of old-school progressive rock, math-rock, metal, fusion, and electronica on their debut EP, This Hyperlink. The result is highly appealing; catchy and tuneful in ways that one doesn't normally associate with progressive rock of any sort. Drummer Ben Durfee and bassist Paul Wagner keep the complicated rhythms funky, loose, and—despite the preponderance of odd and compound time signatures—dance-able. Viewed from afar, Octaveleven's sound bears some resemblance to the music of so-called djent bands such as Animals as Leaders, Polarization, Scale the Summit, and Chimp Spanner. But there are significant differences that make their music stand out and demand attention.

Unlike all of the aforementioned, Octaveleven completely eschews guitars—opting instead for a universe of keyboard sounds generated by bandleader and composer Philip L. Maddux. While the compositions leave little, if any, room for improvisation, Maddux' keyboard orchestrations are uniquely over- the-top. This is where the old-school prog / fusion elements come to the surface, as Maddux' keyboard array employs facsimiles of Fender Rhodes piano, mini-Moog, and even a snippet of Hammond B- 3. Also present are pulsating, squelchy synthesizer sounds that resemble electronica (e.g., Amon Tobin, The Future Sound of London), and otherworldly washes, whooshes and swoops employed by cosmic rockers such as Ozric Tentacles and Øresund Space Collective. Instead of stringing a succession of riffs together, Maddux' compositions are well-integrated and carefully mapped-out. The relative lack of improvisation necessitates strong melodies and interesting changes, both of which This Hyperlink has in abundance.

Durfee's metal-inflected drumming is mixed way up front and, at times, the music sounds like a drums and keyboards duet. Though Wagner's bass seems to take a back seat to the interplay between the drums and keyboards, he provides a steady and propulsive core to Maddux' multi-sectioned compositions and Durfee's gleeful, fill-happy traps bashing. In fact, This Hyperlink is executed with such polish and relentless forward motion that—despite being a locally-sourced, shoestring operation—it's the musical equal of more well-known bands.

The Positrons That Hold You; Changing The Speed of Rotation; This Hyperlink; Enter The Atmosphere.