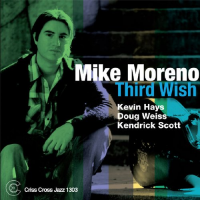 Third Wish is the sophomore release by guitarist Mike Moreno, yet it sounds more like the umpteenth recording of a veteran who's been in the trenches for many years—cool, calm, and collected, with nothing to prove but the music itself. It encapsulates Moreno's persona: fluid precision, lyricism, distinct tonality, and modernistic playing.

It's obvious why Moreno's exposure as a first choice player is growing. Whether laying down funky hip hop guitar on Open Reel Deck (Strick Muzik, 2007), reinterpreting classic rock music of Pink Floyd on The Jazz Side of The Moon (Chesky Records, 2008) or "super genre-specific" performances with Wynton Marsalis and the Jazz at Lincoln Orchestra, he's a player that brings individuality and a certain spark to the music.

A departure of sorts from the outstanding debut, Between The Lines (World Culture Music, 2007), this date on Criss Cross (noted for their robust straight-ahead releases) is a mixture of covers from the greats (Billy Strayhorn, Herbie Hancock, and Joe Henderson) and three Moreno originals. Ultimately familiar, the standards are conveyed with empathy and originality by a smoking session-group that includes pianist Kevin Hayes, bassist Doug Weiss, and drummer Kendrick Scott; all consummate leaders/players, sounding as if they'd been touring together for months.

Moreno and the band's approach to the standards is quite enjoyable. The heart and soul of the classics are retained, but the group keeps them fresh by giving heady interpretational spins such as the upbeat version of Hancock's "I Have a Dream." The intro chords and setup of the melody are imbued with a graceful movement that includes an incredible solo by Moreno marked by his undulating notes and aerial searching. Kevin Hayes follows with playing that would make Hancock smile and Weiss and Scott provide scintillating support.

The aesthetic textures—such as Moreno's acoustic guitar and Weiss' woody arco—fill songs like "Children of the Night," helping to enhance the music. The burning notes of "Isotope," the blissfulness of "Lush Life," and the circuitous stream of Moreno's title track or "Street Lights," with some snazzy trading from Moreno and Hayes' Fender Rhodes, are new contemplations of an artist who sees and hears things in a slightly different way.

Equally as strong as Between The Lines and in some ways more revealing, Third Wish further establishes Mike Moreno as one of today's rising jazz guitarists.

I Have A Dream; Children Of The Night; Isotope; Lush Life; Third Wish; Another Way; Street Lights; A Flower Is A Lovesome Thing.