By GLENN ASTARITA
January 1, 2000
Sign in to view read count 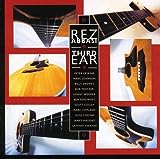 Third Ear is a reissue of sessions guitarist Rez Abbasi recorded in 1991 & 1992 along with a star studded cast of modern jazz luminaries such as bassist Marc Johnson, drummer Peter Erskine, saxophonist Bob Mintzer and others. Here, Abbasi pursues contemporary jazz with a modern or in some instances hard edge yet not quite as bold or adventurous as his exemplary 1998 showing for “Cathexis Records” titled, Modern Memory. Nevertheless, Abbasi turns in a commendable performance as a sculptor of melodically tinged lines coupled with contrasting spurts of dissonance and offsetting lyricism while often providing the listener with an element of surprise along with frequent displays of unruffled inventiveness. Pieces such as “Resonance” find the guitarist churning out crisp, clear-toned lines over shifting meter as Abbasi injects an amalgamation of richly thematic statements with impacting and deterministic single note lines. One of Abbasi’s distinct talents as a jazz guitarist lies within his ability to utilize most registers of his instrument with concise mid-tone phrasing while often having some genuine fun with the rhythms and the occasional rapid unison lines with the other soloists. “Memorial Daze” features the killer rhythm section of bassist Marc Johnson and drummer Peter Erskine who appear on several cuts while the equally adept rhythm section of drummer Ben Perowsky and bassist Scott Colley provide stellar support on other tracks. On the composition, “Third Ear” – Abbasi provides a heavy handed, sinewy attack atop wavering rhythms as this piece evolves into a rapid swing motif featuring saxophonist Bob Mintzer. On “For The Birds And The Bees”, Billy Drewes turns in a lushly romantic alto sax solo while Abbasi follows suit with a well developed guitar solo which suggests a sense of relaxed tension or perhaps that of - something slightly divergent or ominous lurking in the shadows. Abbasi is also a master at extricating just enough sweetness out of a somber or richly melodic composition

In summary Third Ear is a noteworthy effort from this jazz gunslinger who possesses an insatiable thirst for captivating the listener with his deeply personalized sound, gargantuan technique and intelligent compositions. * * * *

Resonance, Prana, Memorial Daze, Third Ear, Sheets Of Rain, For The Birds And The Bees, Mood Sketch, A Passage For You