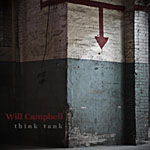 Every once in awhile there emerges a record that is brimful with sinewy, simply honest music that reverberates from one song to another and leaves echoes of melodies or twists and turns in the musicians' solos long after the last notes of the record have died down. This is how alto saxophonist Will Campbell's debut as leader, Think Tank, runs the gauntlet in the tough and crowded musical world where post-bop alto saxophonists have been competing ever since Charlie Parker left the scene six decades ago.

One reason for this is that Campbell is a no-nonsense horn player who eschews rapid lines and flashy arpeggios for slower, more meditative playing. The other reason is that Campbell is a fine composer, who writes memorable, challenging melodies that appear to bring out the best in his band. And then, of course, there is the small matter of his fine arrangements—especially evident on the Burton Lane/Alan Jay Lerner standard, "On a Clear Day," which features one of the finest bass solos heard on record for a long time, courtesy of John Brown. The bassist gives immediate notice here that he has taken lessons from Ray Brown seriously; he seems to have emerged from the shadow, which the master casts, with brilliant melodic warmth.

There is no specific instrumental dominant in the ensemble, but the harmonic duets of Campbell and trumpeter Scott Harrell are a thrill to listen to. Both musicians appear to have discovered a tonal universe as vast as the ocean of sound their respective instruments are capable of. They then proceed to cross it whenever the opportunity presents itself, which is pretty much on every track. When Campbell races ahead, Harrell takes a little more time on notes, letting the harmony hang back just a bit. At other times the order is reversed. Then there is soloing of each musician. Campbell is always meticulous in his pace, letting his warm, fat tone sing out as he constructs solos of breathtaking resonance. Harrell is quieter, more circumspect. Overall, the trumpeter is more inside-out in his phrasing and always soft and subtle as he lets his lines sally forth like velvet ribbons from his burnished bell.

This partnership is magnificently displayed on the sharply angular "Think Tank" and the cutting edge of "Both of Them." Both musicians stretch in the grand manner on the sharply elastic "Eleven Years" before bassist Brown interjects with a most expressing and melodic solo. This song also shows what a fine accompanist and sensitive pianist Stefan Karlsson is as he navigates a wonderfully harmonic path just under the fine solo by Harrell. This record is full of such invention, whether by Karlsson, Brown on even drummer Rick Dior, who plays in shades of watercolors throughout, especially behind Karlsson; this is a pianist who is continuously inventive, both harmonically and rhythmically.

This may be a quiet record, by musicians who slipped in for a gig, then slipped away. But it is making quite a noise already.

Think Tank; Eleven Years; Olive Street; Both of Them; On a Clear Day; 7E; All Hail.