By CLIFFORD ALLEN
October 5, 2003
Sign in to view read count 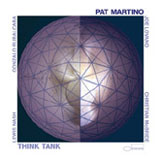 It is difficult to make mainstream jazz (hard bop, etc.) relevant in light of the subversion or destruction of its form that occurred over thirty years ago. But, as many improvisers proved, it was possible to make consistently engaging and advanced music in the hard bop idiom well after the innovations of Ornette and Cecil took hold, and though the case for it is a little tougher today, there are a number of musicians who have found something new to say with this language. It is not entirely clear from this recording whether guitarist Pat Martino has made such a case or not, but in any event, the band he has assembled for Think Tank, his fourth album for Blue Note, does have something to say.

Martino is joined here by tenor saxophonist Joe Lovano, pianist Gonzalo Rubalcaba, bassist Christian McBride and drummer Lewis Nash (in other words, an all-star cast of neo-boppers). The guitarist is the "old man" of the group, having recorded with Jack McDuff among others in the '60s and '70s, though a 1980 brain aneurysm curtailed his playing activity for several years until he could re-learn his instrument. Martino is a modal improviser, similar to John Abercrombie or Attila Zoller, but despite a wide harmonic vocabulary, his playing is quite pedestrian, and offers little in the way of inventiveness.

Rubalcaba is the greatest revelation here; his piano style has elements of a young Mal Waldron or Herbie Hancock (ca. Grachan Moncur III's Some Other Stuff ) in its use of minimalist repetition and an insistent left hand. There is also a subversiveness and eclecticism reminiscent of Jaki Byard. After Lovano's fairly storming solo on "Phineas Trane, Rubalcaba comes in at the slowest possible tempo, repeating sketches of a solo element, and the rhythm section appears completely oblivious to what has happened. Even ballads aren't safe territory; "Sun on My Hands, a duo for guitar and piano, finds Rubalcaba placing dense bottom-end tone clusters behind Martino's improvisations at one point, darkening the mood quite effectively.

Though not as immediately attention-getting as Rubalcaba, Lovano's tenor style is solid and effective, reminiscent of mid-'60s firebrands like Joe Henderson or Sam Rivers with a gutbucket low end and regular use of harmonics that keep his solos lively, if not groundbreaking. Unfortunately, McBride and Nash are not particularly spry, basically serving to keep time behind the explorations of Rubalcaba, Lovano and Martino. Compositionally, the up-tempo numbers are lifted straight from the Coltrane and Lee Morgan books ("Quatessence and "Earthlings are basically "Giant Steps ), though "Phineas Trane revisits Andrew Hill's "Pumpkin nicely (a rare homage indeed).

Think Tank is a pretty standard affair in the annals of modern mainstream jazz, though the group has a savior in Gonzalo Rubalcaba, whose inventiveness shows a willingness to subvert and challenge his mates. It is when the group is challenged within an idiom that that idiom can be said to be living, and for that we have players like Rubalcaba and, to a degree, Lovano. Hopefully, the rest of the group was inspired enough that their next date together will be an advance.