By JEFF DAYTON-JOHNSON
September 13, 2006
Sign in to view read count 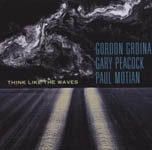 The leader favors a mellow and meditative approach to the guitar, but while he might be tempted to ease into too-sweet lyric beauty, Motian can be counted on to add disquieting texture that prevents the proceedings from becoming dull. Peacock is right in between: ready to underscore his former student's song-like lines at one moment, but likewise willing to provide counterpoint to Motian's complex contributions at another moment.

Grdina's compositions build on these strengths: they are melodic, mysterious, nocturnal, just this side of mournful, and he prefers waltz tempos (as did Evans and Hall forty years ago, come to think of it). His soloing emerges subtly from the melodic statement of the composed themes. "100 Years" is an especially lovely example of all these elements. The track's title, furthermore, pays homage to Gabriel Garcia Márquez's One Hundred Years of Solitude, an allusion that professes the link between the trio's music and the Colombian novelist's blend of bittersweet, dreamy reveries and florid magic realism. The claim may be a bit lofty, but it's not an unreasonable comparison.

The record sounds a little like some of Motian's recent experiments, notably Garden of Eden (ECM, 2006). (In fact, check out Budd Kopman's poetic comparison of the Motian disc to the aforementioned Latin American novel.) If anything, the smaller band makes it easier to hear the drummer's much-commented multidirectional but generally quiet playing, especially on "Yellow Spot into the Sun" and "Cobble Hill."

Then there's the oud, which Grdina plays on the title track and a few others. Grdina may not be the master player that Anouar Brahem is, but neither is he a dilettante: just listen to the crystalline solo prelude to "Morning Moon." Indeed, the trio oud tracks provide the kind of empathetic interplay and subtle transition between composition and improvisation that everyone but me seemed to hear in Brahem's oud trio record Le Voyage de Sahar (ECM, 2006).

Grdina's bandmates could probably sustain interest in just about any recording, but the leader's composition, soloing and musical conception more than hold their own in this august company.