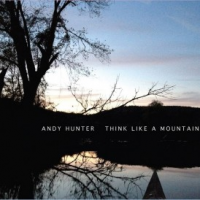 Trombonist Andy Hunter has taken a seat in many of the most important big bands of the past decade, yet many are still unaware of his skills. He sadly suffers from "section man syndrome": that ailment that afflicts those who are heard by many, yet never truly seen for who they are. Hunter, who has resided in Brooklyn for the better part of a decade, has put his round and occasionally robust horn to good use in bassist Dave Holland's Big Band, drummer Tommy Igoe's Birdland Big Band, saxophonist Travis Sullivan's Björkestra, the Mingus Big Band, pianist Orrin Evans' Captain Black Big Band and several other high profile East Coast ensembles, but he's putting himself first on Think Like A Mountain.

Hunter enlisted some of New York's finest, most of which happen to be fellow Mingus Big Band alumni, to flesh out his intriguing ideas. He uses a three-horn-plus-rhythm format, which is nothing revolutionary, but his choice of horns, method of scoring/writing and decision to substitute Fender Rhodes for piano give the group its own unique sound print. Trombone, baritone saxophone and trumpet make for an intriguing combination, with a rich bottom end and a brassy shine, and Dave Kikoski's Rhodes work is second to none, as he proves to be one of the few people who don't drive the instrument into stale, '70s-derived territory or outer-planetary explorations.

The material ranges from funereal and atmospheric ("Less Is More") to harmonically rich and aggressive. Hunter has a penchant for writing chorale-like horn passages that pop up in various places and make the music glow; he gets three horns to sound like five and fills the sonic space without overcrowding it. Straight eighth-note post-modernism ("Think like A Mountain"), enjoyable standard rewrites ("Bewitched, Bothered And Bewildered") and odd-metered journeys are all part of Hunter's vision. He hits the jackpot in completely different games, delivering a brilliant and choppy, odd-metered funk/fusion hybrid built around Danny Fischer's drumming ("Ampersand Band") and a slow, bluesy number with a soulful solo from saxophonist Jason W. Marshall and some eye-opening trombone work ("Post-Occupational Hazards For The Pre-Occupied 99%...Blues").

While Marshall and Fischer get special mention for those important moments, Kikoski, bassist Boris Kozlov and trumpeter Alex Sipiagin deserve credit for versatility. Kikoski lightly coats some of this music, staying out of the way to let the others do their thing, but he knows when to let loose and seize the day with his soloing ("Bewitched, Bothered And Bewildered"). Sipiagin floats like a butterfly, with warmth and depth, and stings like a bee, with a powerful punch, and Kozlov takes the music wherever it needs to go at a moment's notice.

Think Like A Mountain makes it easy to understand why Hunter is such a hot commodity in big bands—and so undervalued as a standalone artist. He's part of the same class of trombonist as Ryan Keberle and Marshall Gilkes: men who are often too busy making other groups sound good to attend to their own work.

Think Like A Mountain; What Is This Thing Called Love; Deed By Delusion; Bewitched, Bothered And Bewildered; Ampersand Band; Astringent; Less Is More; Post-Occupational Hazards For The Pre-Occupied 99%...Blues.