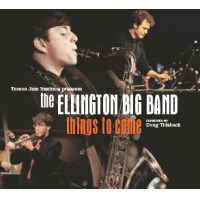 To accentuate the positive, the ten-year-old Ellington Big Band, flagship ensemble of the Tucson (AZ) Jazz Institute, established its credentials by earning first-place honors twice (2010, 2012) in Jazz at Lincoln Center's annual Essentially Ellington competition, and has been named best Performing Arts High School Jazz Band by DownBeat magazine. On the heels of these honors, the band displays its muscle and savvy on Things to Come, a wide-ranging anthology of jazz and popular standards that have stood the test of time.

Doug Tidaback, who has directed the Ellington Big Band since its inception, is understandably proud of its achievements, which have raised it to the forefront among student ensembles. The band doesn't let him down here, slicing through Benny Carter's "Rompin' at the Reno," Count Basie / Eddie Durham's "Swingin' the Blues," Ellington's "Happy Go Lucky Local" and Dizzy Gillespie's chops-busting "Things to Come" with power and panache. One question that arises is, with a band that talented, why squander so much precious time on run-of-the-mill vocals? Robbie Lee, a competent pianist, is no better than passable as a singer on "I've Got You Under My Skin" and "New York, New York," trumpeter Gavin Tidaback even less so on "I'll Be Seeing You" (hang onto that trumpet, Gavin). To further muddy the waters, Lee and Tidaback "sing" (and scat) on Gillespie's "Oop Bop Shabam."

Clearly, the instrumental tracks (there are six) hold the stronger hand, starting with the buoyant "Reno" and proceeding through those already named, as well as Ellington's "Sunset and the Mockingbird." Max Goldschmid, the band's resident jack-of-all-trades, solos on alto sax and trumpet on "Reno," alto again on "Swingin' the Blues," clarinet on "I'll Be Seeing You" and "Sunset," alto on "Oop Bop Shabam" and "Local," tenor on Bubber Miley's "Everything in Its Right Place," trumpet, tenor and trombone on "Things to Come." Other soloists of note are pianists Lee and Grant Cherry, trumpeters Tidaback and Omar Lincoln, trombonist Sam Chess, tenor Alan Acosta, alto Sean Johnson and vibraphonist Ryland Mandish. The rhythm section is in good hands with bassists Jeff Sandberg or Zach Levine, guitarist Shane Hurtado and drummers Mandish or Tim Rachbach.

In sum, a persuasive enterprise by a first-rate ensemble that could have been even more engaging with more band, less vocals. Definitely worth checking out.

Rompin’ at the Reno; I’ve Got You Under My Skin; Swingin’ the Blues; I’ll Be Seeing You; Oop Bop Shabam; Sunset and the Mockingbird; New York, New York; Happy Go Lucky Local; Everything in Its Right Place; Things to Come.