By C. MICHAEL BAILEY
September 10, 2010
Sign in to view read count
Track review of "'Round Midnight" 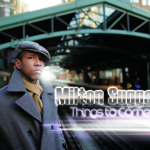 There is a warm wind blowing in from Chicago and his name is Milton Suggs. With male jazz vocalists an endangered species, any new discovery is noteworthy, but Suggs is something special. Suggs is a brilliant throwback-bring-forward combination of Joe Williams's grace, Johnny Hartman's sensuality, and representing the singer's anima, Betty Carter's electric elasticity.

Things to Come boasts the singer's embarrassment of talent as composer, lyricist, and singer. He is equally competent in all band formats, from big band to trio. It is in this sparest format that Suggs' power as a singer and a stylist is both tested and tempered. "'Round Midnight" has always been a strange composition, made stranger when Bernie Hanighen composed lyrics for Thelonious Monk's haunted ballad.

Always untethered, Suggs pins down the roaming, enigmatic melody, presenting it as if written by Jack Kerouac, hip and immediate. Suggs' trio swings, Willerm Delisfort's solo never dissipating into mere Monkisms. Patrick Mulcahy's Paul Chambers-certain bass propels the song to excellence. There is everything to endorse Suggs' Things to Come.